Pret-A-Portea: The Dior Couture Collection at The Berkeley

Blogger Felicia Tan tried the much coveted Dior Collection Pret-A-Portea at The Berkeley. The limited time menu is an exquisite high-fashion imagining of Afternoon Tea.

I've sampled quite a few themed afternoon teas during my time in London, and the legendary designer Prêt-à-Portea at 5-star hotel, The Berkeley, has been high on my to-do list for a while, perfectly located between Hyde Park and fashionable Knightsbridge.

Inspired by the themes and colours of the fashion world, their menu of fashionista delicacies is transformed every six months to reflect the latest catwalk trends, and this time I was fortunate enough to review their exclusive Dior Couture Collection 2019, that runs in conjunction with the 'Christian Dior: Designer of Dreams' exhibition at the V&A Museum. Having swooned over images on social media, it was nice to finally step into the iconic Collins Rooms, named after the legendary British designer David Collins, later redesigned in 2016 by Collins's protégé Robert Angell. We were seated at a lovely corner table in the extended glass pavilion which had a perfect view of the serene space, bathed in the natural light that shone through the windows and bounced off the light coloured surfaces. I was particularly fond of the hand-painted floral wallpaper, inspired by the classic de Gournay cherry blossom and Dior Grey wallpaper, and the chic porcelain white petal chandeliers that hung from the ceiling. 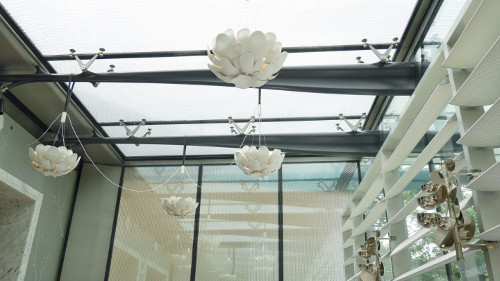 We were kindly offered some chilled champagne to start with - I could never decline a glass of champagne, especially one of my favourites: Laurent-Perrier Rosé. 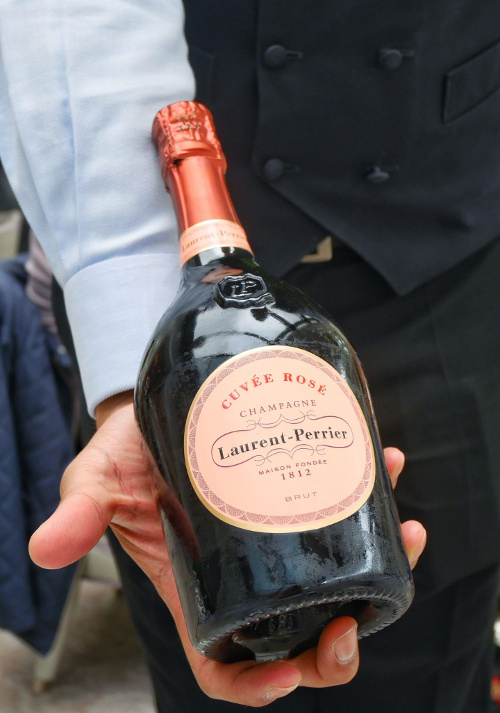 They have an extensive selection of rare and seasonal teas, categorized into six main tea types: white, yellow, green, Oolong, black, and Pu Erh, as well as Tisane, often known as herbal teas. We had the privilege of previewing their First Flush Darjeeling tea that was specially sourced from the Thurbo Tea Estate by Steven, the lovely restaurant manager, who also demonstrated the preparation of the tea for us at our table.
For the coffee aficionados, they also offer single origin coffee which is prepared table side using a modern interpretation of the traditional Japanese Kinto slow brew method. 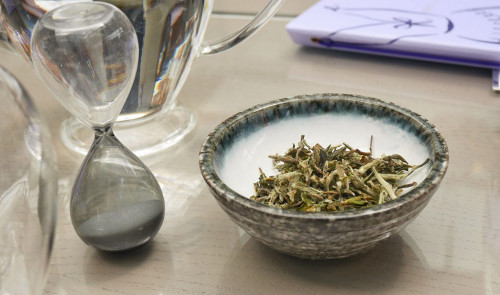 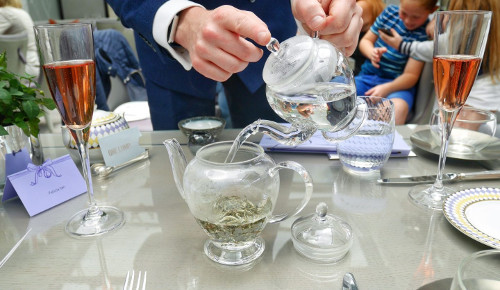 Plates of perfectly hand-cut sandwiches were shortly brought over to the table, their fillings having recently been revamped to match the warmer months which included:

Although smoked salmon filled sandwiches are usually my favourite, this time it was surprisingly the veggie one with baked courgettes and peppers that had a pleasant smokey taste and a hint of spice. 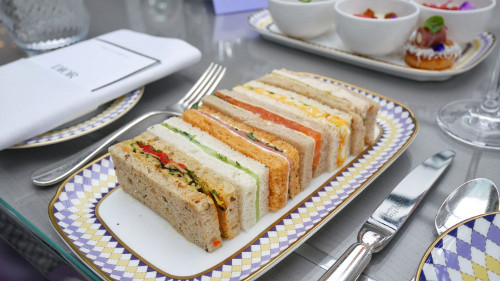 As mentioned before, I am always one to appreciate additional savoury treats alongside the sandwiches, which came in the form of elegantly presented canapés:

All three of them were beautifully created with vibrant and refreshing ingredients - I particularly enjoyed the velouté which had a velvety consistency complimented by the burst of freshness from the cucumber & sorrel jelly. 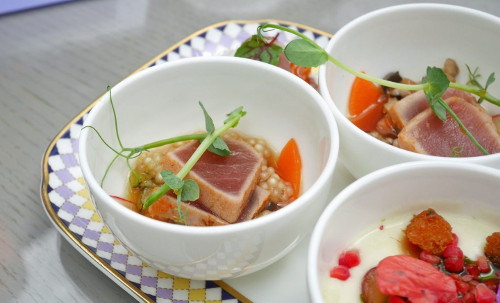 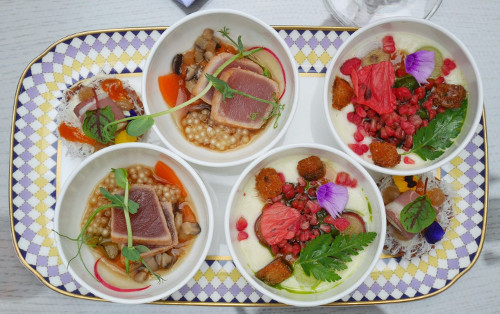 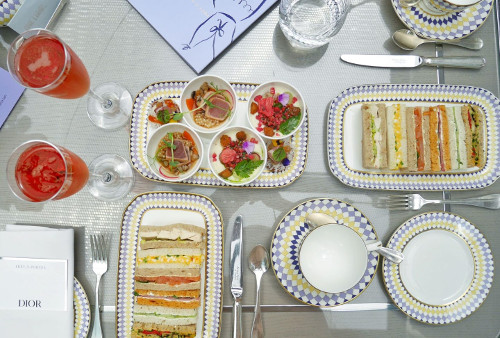 I grinned with excitement as I eyed our waiter approaching our table with the tier of cake and fancies, each piece taking inspiration from Dior's timeless and iconic designs, beautifully presented and finished off with a floral perfume spritz.

After a flurry of picture-taking (because one photo is never enough!) I started with the evening Junon gown, worn by Theo Graham at Le Pré Catalan in Paris 1949, transformed into a fromage blanc and cassis jelly encased with scallops of white chocolate, sprinkled with edible glitter.

The Miss Dior floral Dulcey mousse dress was one of my favourites, which had a Berriolette centre, set on sable Breton and crowned with a violet edible flower. The Muguet pavlova and raspberry jam cake dress was a joyful mouthful, filled with Madagascan vanilla chantilly, and topped with a coconut marshmallow and white sugar bow. The Lady Dior Handbag, a miniature edible replica of the iconic red bag gifted to Princess Diana by France's first lady, Bernadette Chirac, was almost too pretty to eat, made from red velvet cake glazed with red chocolate miroir. 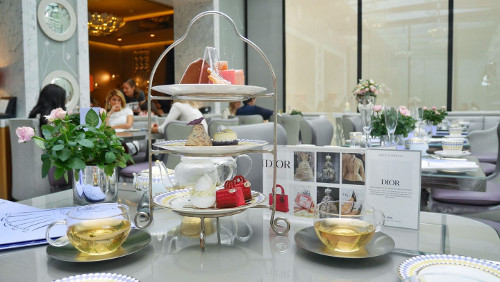 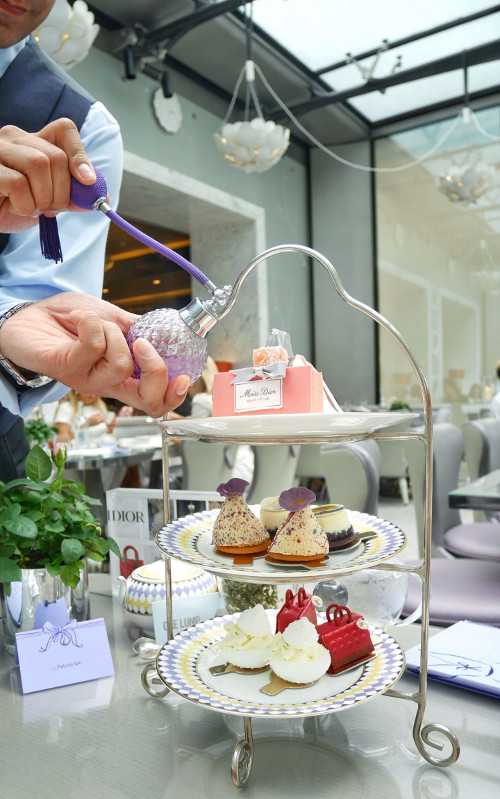 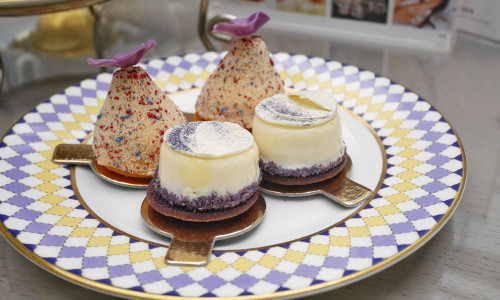 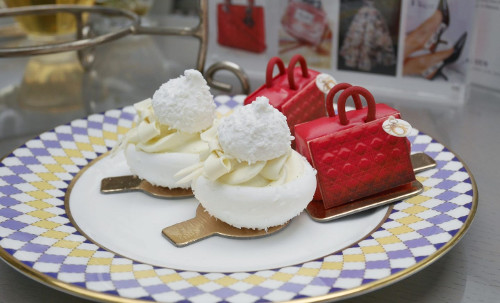 I don't often wear heels, but I do love admiring beautiful shoes, especially one as pretty as this season's must have J'adior slingback pump, and who wouldn't recognize the iconic Bar Jacket which has been synonymous with Dior since it took to the catwalk in 1947 as part of the 'New Look' - both transformed into tasty vanilla biscuits with a royal icing finish. Last but not least, in my favourite colour, was the rose pink Miss Dior eau de Parfum, an almost 'too pretty to eat' lychee and raspberry cake topped with lychee paté de fruit and chic oversized silver bow. 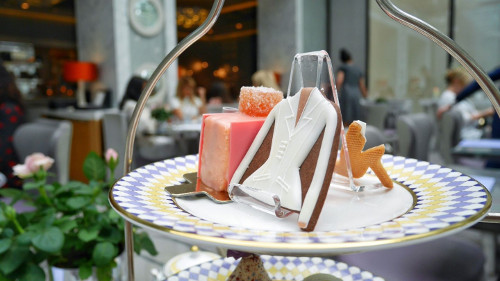 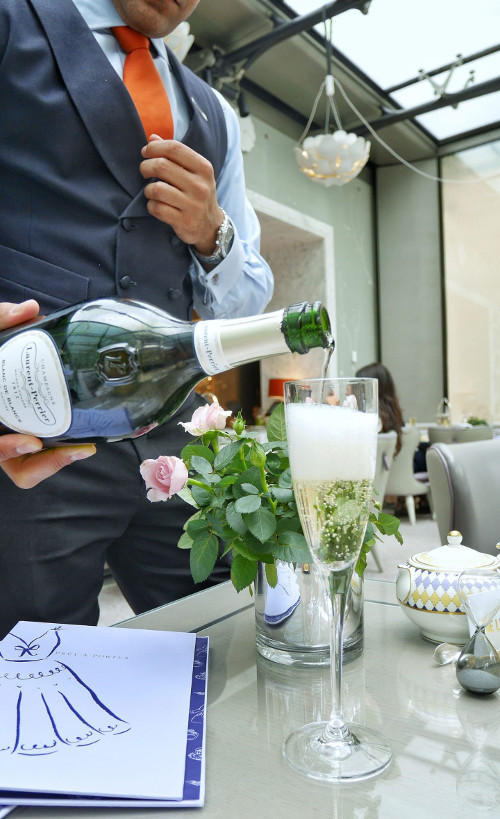 Unlike most afternoon teas, scones are not included as part of the Prêt-à-Portea, but we did have the chance to sample a couple of their plain buttery scones which were definitely up to standard. And of course we didn't miss out on their ever so Instagrammable Dior-printed coffees. 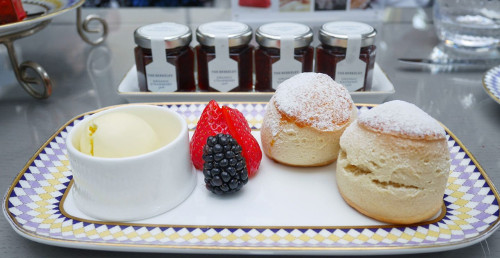 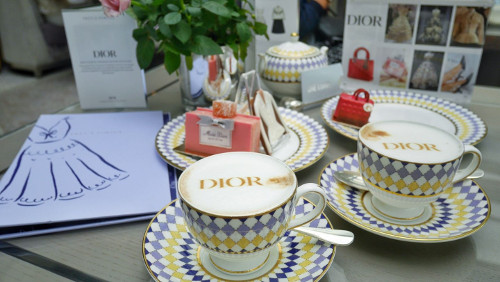 After much anticipation over the last few years, I am glad to say that the Prêt-à-Portea definitely lived up to my expectations and makes it to my personal list of top afternoon teas to try in London - one that will please foodies and fashionistas alike. Now all I need to top it all off is one of those sought-after tickets to the V&A exhibition …

More about The Berkeley