Always on the lookout for some of the most luxurious Afternoon Teas around London and beyond, this time we headed to Mayfair, one of the capital’s most exclusive areas, to sample the afternoon tea at The Betterment, from Michelin-starred chef Jason Atherton.

Until 31st January The Biltmore Mayfair is offering 2 for 1 Afternoon Tea! Click here for more information and to make a booking.

Located within The Biltmore Mayfair, from Hilton's most upmarket branch, LXR Hotels & Resorts collection, it marks his return to Grosvenor Square, opposite to what was previously Maze (now reincarnated as Lucky Cat), where he first rose to fame at its launch with Gordon Ramsay back in 2005.

Having undergone a multi-million-pound redevelopment to rebrand what was previously the Millennium Hotel, the site is undoubtedly an impressive one, with a postcard-worthy facade that draws you into a truly sleek and elegant setting. 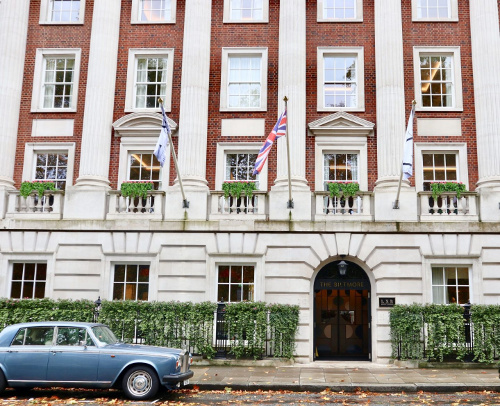 We were seated by a cosy corner next to the windows in the Tea Lounge, where we were attended to by some of the friendliest and attentive staff - good service is always key to enhancing any Afternoon Tea experience, or any dining experience for that matter.

Our glasses were filled with champagne poured from an impressive 1.5L bottle of Krug Grande Cuvée 164 Ème Édition, exceptionally refreshing with fine and elegant bubbles.

This sumptuous afternoon tea menu takes guests on a journey throughout the United Kingdom, where each ingredient is specially sourced from a different region of the country, beautifully illustrated on a classy trifold menu. 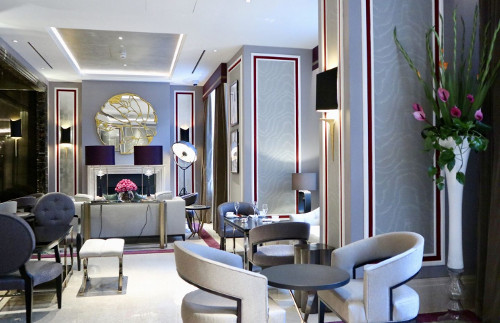 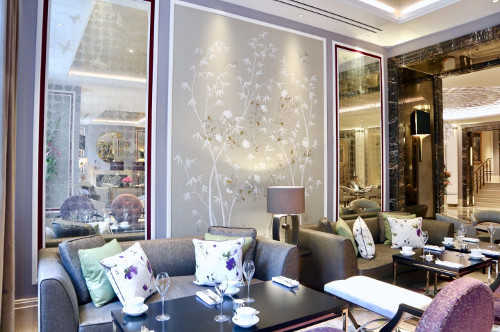 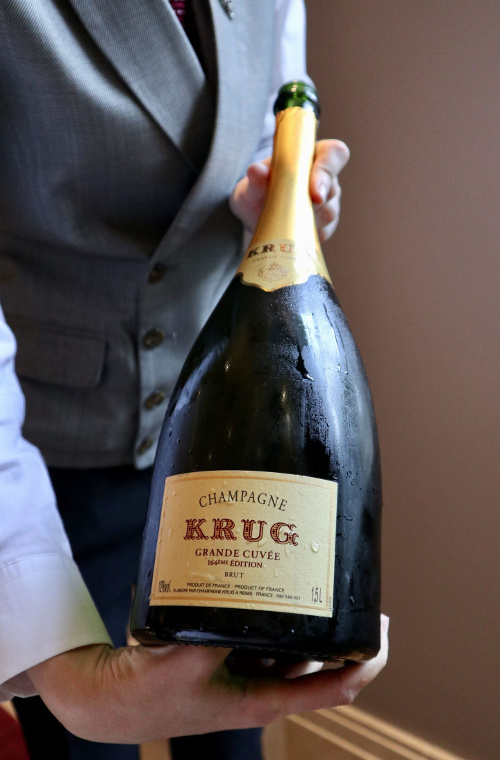 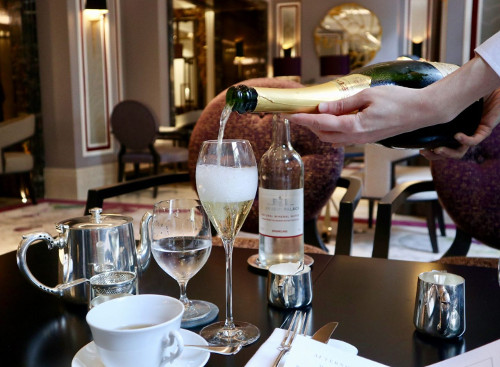 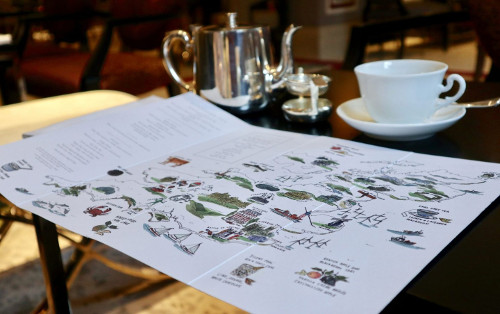 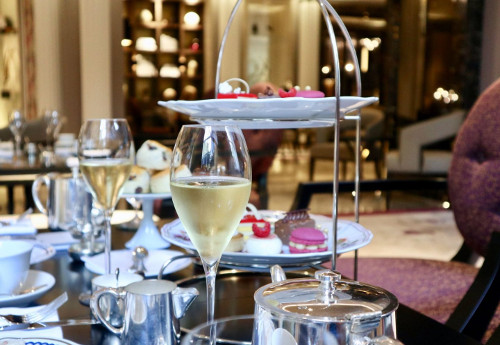 Their whole leaf tea selection are sourced by the Rare tea Company. I sampled about four different teas throughout the afternoon, starting with the Tea for Heroes English Breakfast, a bespoke blend that comes from the Makaibari Estate in Darjeeling, India and Satemwa Estate on Thyolo Mountain in Malawi, specially made for the Royal Air Forces Association. This was followed by the Nepalese Himalayan Spring green tea, Waikato Oolong from New Zealand, and finishing off with the delicate Jasmine Silver Tip white tea. 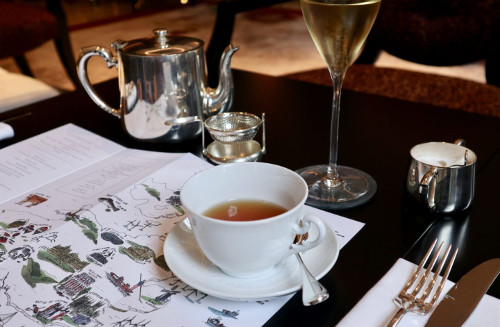 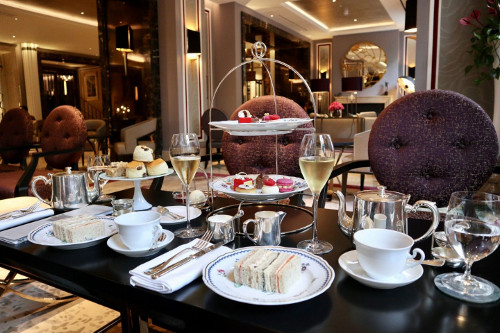 Presented to us on our own individual dishes was a selection of four perfectly hand-cut sandwiches. There was a one filled with Brillat-Savarin, the lusciously creamy classic and original triple-cream cheese, with pickled cucumber, and Wiltshire truffle, on granary bread. The Hereford beef sandwich was tasty with a nice hint of spiciness from the horseradish cream. My favourites were the seafood based ones which included the Brixham Crab, with Somerset citrus yoghurt, on rye bread, and the smoked Severn & Wye salmon, with lemon, dill, and London ricotta, served with wholemeal bread. 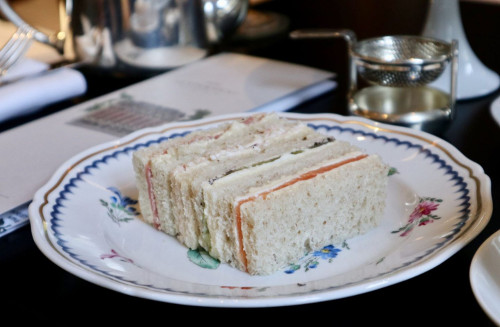 We were served the classic duo of plain and fruit scones with Cornish clotted cream, raspberry jam, and strawberry jam. Fresh and warm to the touch, they were definitely some of the best scones that I've had (and I've had quite a few throughout my food-blogging days!) - they had a good 'rise' to them, and despite their size, were extremely light and buttery. I find that I struggle with one scone alone at most other afternoon teas, but had no trouble at all demolishing two this time as they were extremely fluffy and non-stodgy at all - I was tempted to order more but resisted… 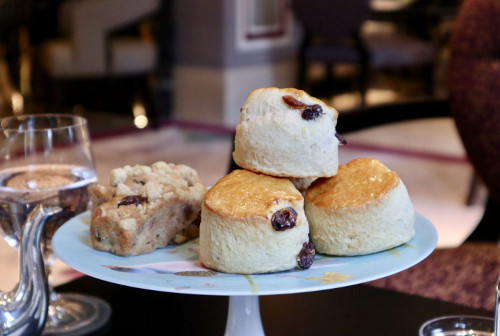 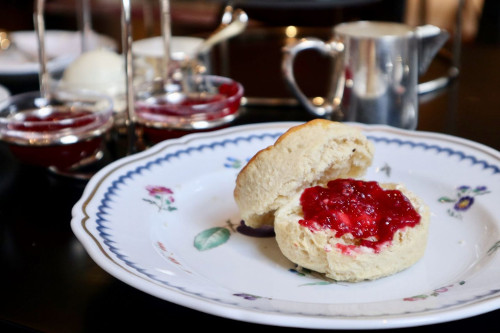 Moving on to the sweet delicacies, we started with the Dorset spiced apple cake that was as moist as it could be, with juicy bits of apple and lovely hints of cinnamon. The ginger parkin, a gingerbread cake that originates from Northern England, formed a sweet and nutty base, topped with hazelnut cream, salted caramel, and held together by a milk chocolate shell, a rather indulgent treat for any chocolate lover. We really enjoyed the Kentish apple & blackberry tart, made with an extremely smooth vanilla crème brulee centre and garnished with a slice of crystallised apple. The Gin & Tonic cake, made with Silent Pool gin, had been neatly sliced to reveal defined cake layers flavoured with lime, orange, and white chocolate, delicately covered by a vibrant red mirror glaze. I'm always a fan of a good macaron, and was partial towards the perfectly shaped lemon and lavender macaroon infused with Earl Grey tea. We saved the best for last, the Cranachan, made with Bruce Farm raspberries, whisky, honey, and toasted oats that gave a contrasting texture - a fine way to end the afternoon. 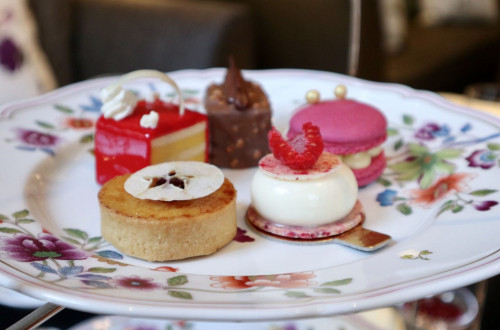 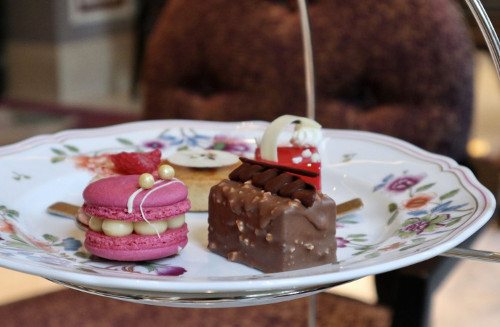 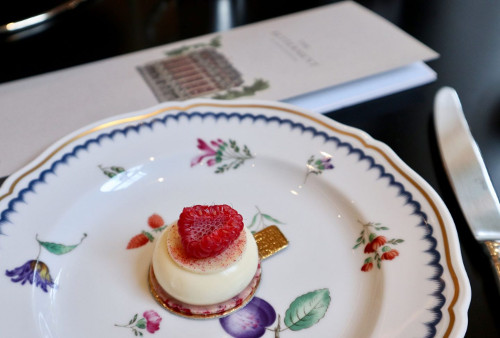 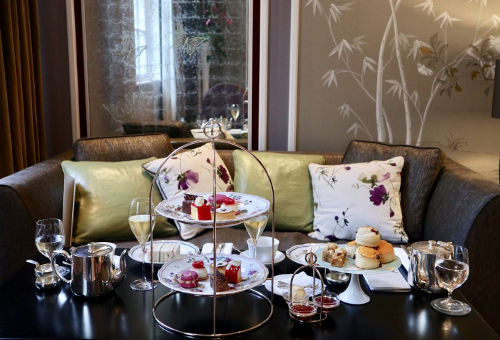 More about Afternoon Tea by Jason Atherton at The Biltmore Mayfair