The Rubens At The Palace Royal Afternoon Tea

Treat Mum this Mother's Day to Afternoon Tea at Ruben's At The Palace. In this offer, you'll enjoy a range of sumptuous themed treats, a champagne or glass of cocktail on arrival and Mum will also receive a small gift , all for £70 per person. Available on 30th and 31st March. 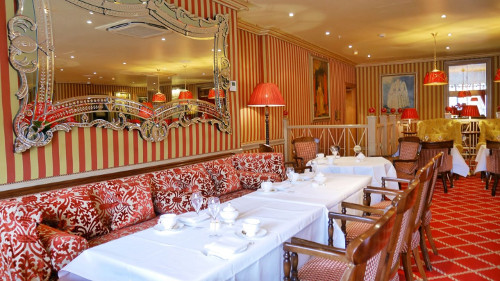 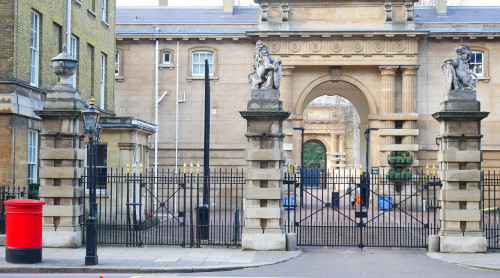 With a never-ending list of things to do that I've compiled for the New Year, a visit to The Rubens at The Palace was definitely a great way to start 2019 on a high. Family-run and owned since 1912, the majestic 5-star luxury hotel overlooks the Royal Mews of Buckingham Palace. 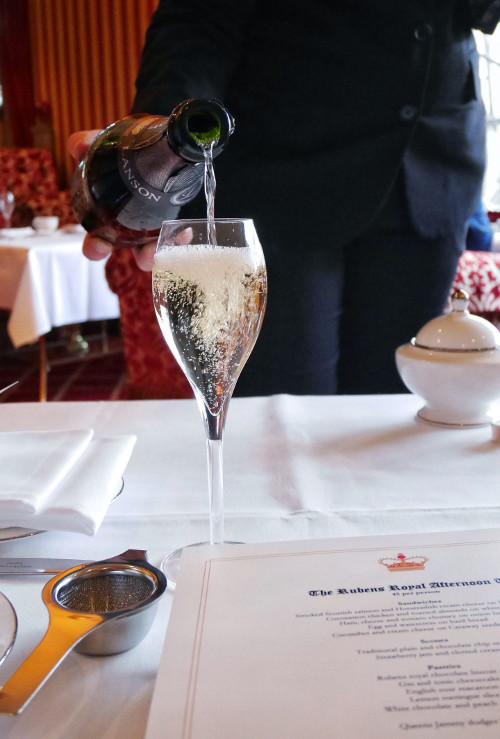 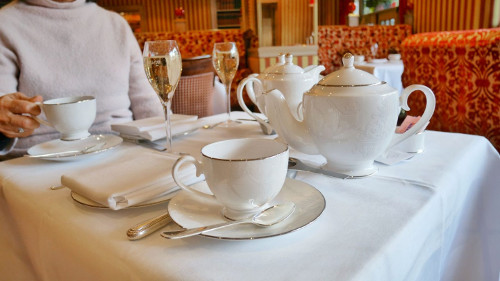 We were seated at a lovely table in the Palace Lounge, just by the stunning floral centrepiece of vibrantly coloured coral anthurium, and had a prime view of the Royal Mews of Buckingham Palace just across the road where we could observe the comings-and-goings of the guardsmen.

Alongside our glasses of delicious Lanson Black Label Champagne, we both chose two of their exclusive teas from their selection of Twinings teas. The Rubens Blend was an aromatic and sophisticated blend of Indian and Chinese black teas, featuring rich Assam, Darjeeling and a touch of smokey Lapsang. Mum had the Royal Jubilee Blend, which was a bespoke blend of Yunnan and Assam black teas created in celebration of the Diamond Jubilee of Queen Elizabeth II.

The pastry kitchen at The Rubens is led by their talented pastry chef Sarah, producing the freshest pastries and cakes for guests to enjoy. Recently highly commended at the Afternoon Tea Awards 2018, their Royal Afternoon Tea features mouth-watering pastries that were heavily influenced by Royal events and dining trends throughout the centuries. 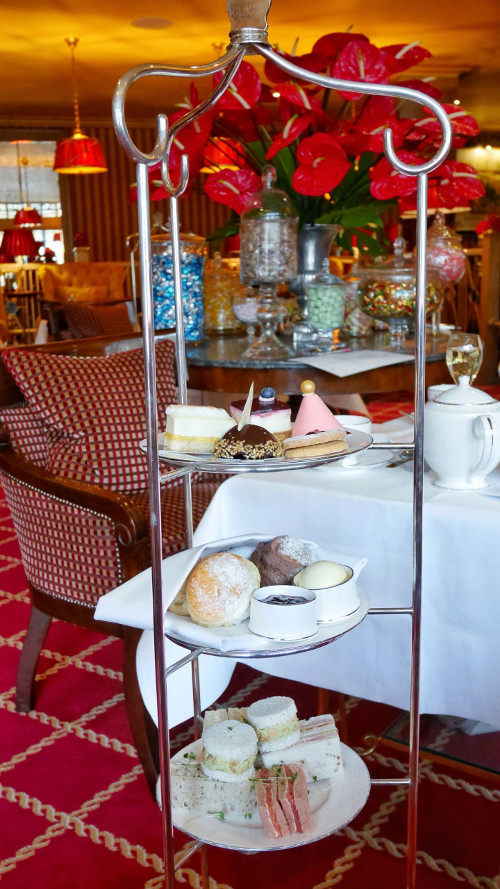 The sandwiches are often the first thing I dive in for, and the best ones are always the ones that are freshly prepared prior to being served - because nobody wants to be served dry, stale bread or cold sandwiches that have been sitting in the fridge beforehand. These sandwiches were thankfully fresh and moist with a good amount of filling. The classic fillings were sandwiched in between a variety of different breads such as egg and watercress on basil bread, cucumber and cream cheese on Caraway seeded bread, and ham, cheese and tomato chutney on onion bread. My favourites were the Coronation chicken and toasted almonds on white bread which had been cut into cute round circles, and the smoked Scottish salmon and horseradish cream cheese on beetroot bread, which was also mum's favourite. 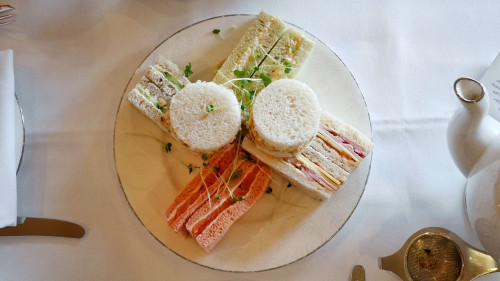 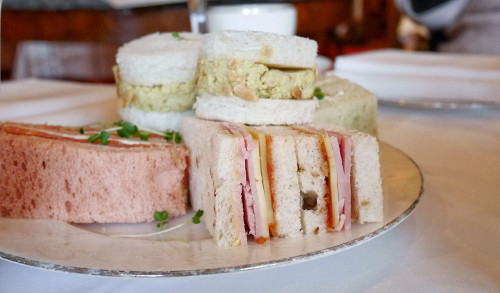 Whilst they were still nice and warm, we tucked into the freshly baked scones that looked fluffy and appetizing in appearance. The traditional plain scone was as light and buttery as I had hoped for, and as a huge chocolate lover, the chocolate chip scone sure worked a treat for me. Served on the side was an inviting sphere of rich clotted cream and strawberry jam. 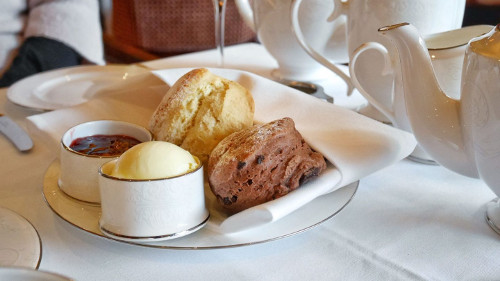 Moving on to the colourful pastries, we started with the Rubens royal chocolate biscuit cake - chocolate is known to be one of the favourites of the Queen, and she is said to have a piece of chocolate and a glass of Champagne each evening before bed! This cake is also a particular favourite of Prince William and Prince Harry, so much so that it was even the groomsmen cake at Prince William's wedding. I've always been a firm believer that the combination of chocolate and biscuits was a match made in heaven. The gin and tonic cheesecake was smooth and creamy - gin happens to be a favourite spirit of the Queen's (one part gin, two parts Dubonnet with a slice of lemon and a lot of ice). "I need a gin and tonic", were also the words rumoured to have been spoken by the Duchess of Cornwall after she finally had a discussion with Prince William about her relationship with his father! 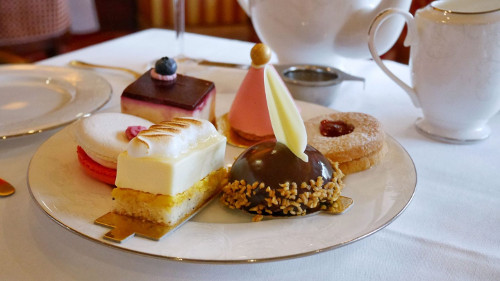 The rose macaron, made in honour of the English rose, had pleasant floral notes and a soft, chewy texture, and the lemon meringue slice was inspired by lemon curd, a favourite with the Queen that she especially enjoys with tea. The white chocolate and peach mousse was inspired by the Queen's favourite fruit for which she would often opt for as dessert after dinner, particularly the white peaches grown in greenhouses at Windsor Castle. The white chocolate outer layer was quite sweet but this was balanced out by the light and airy mousse inside. Last but not least was the Queens Jammy dodger biscuit, as it's traditional to have a biscuit with tea combined with the Queen's love for jam pennies. Towards the end of our experience, we were also served a surprise biscuit treat with delicate icing that was a nice touch. 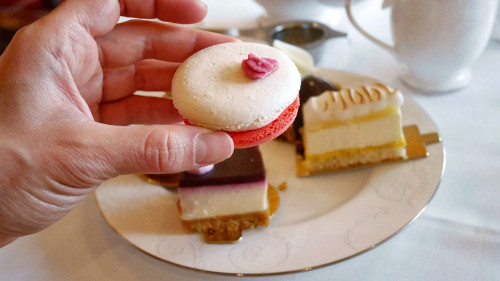 We both really enjoyed the Rubens Royal Afternoon Tea that was definitely an indulgent treat fit for royalty, accompanied by very friendly and efficient service.
The Royal Afternoon Tea, priced at £45 per person, is available 7 days a week from 12pm - 5pm (Monday - Friday, Sunday) and 12pm - 6pm (Saturday). A Vegan Afternoon Tea alternative is also available. Reservations are recommended and can be made on the interface above. 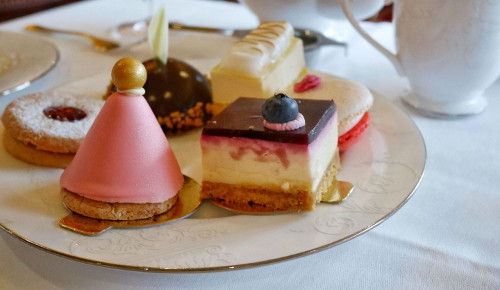 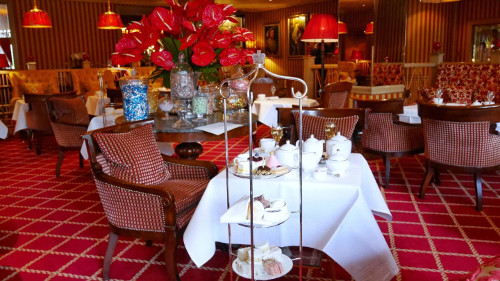 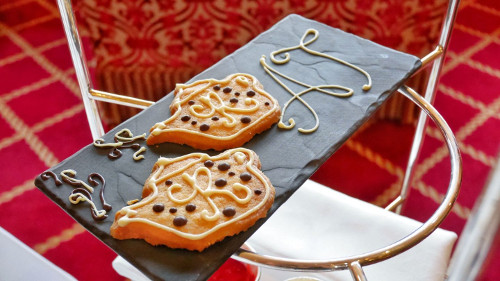 More about The Rubens at the Palace