Afternoon Tea at The Coral Room


We escaped the rain one Saturday afternoon and visited The Coral Room, situated in The Bloomsbury Hotel, near The British Museum, to try their luxurious Afternoon Tea.

On a rainy Saturday afternoon, a friend and I braved the crowds of central London and headed to the Coral Room, attached to the Bloomsbury Hotel on the outskirts of Soho to sample their seasonal afternoon tea. Despite the Bloomsbury's rich history, the Coral Room actually only opened a year ago, yet as soon as you step through the doors you feel as if you've been teleported back a hundred. The salon is ensconced in decadent 1920's decor, from the paintings on the walls to the grand curtains, but most importantly the pink wallpaper, echoing the name of the establishment; alongside an eye-catching chandelier not dissimilar to that of the coral reef- truly on theme. Alongside the interiors and the smiles we were welcomed with, it was quickly determined that decadence and indulgence were the themes of the afternoon. 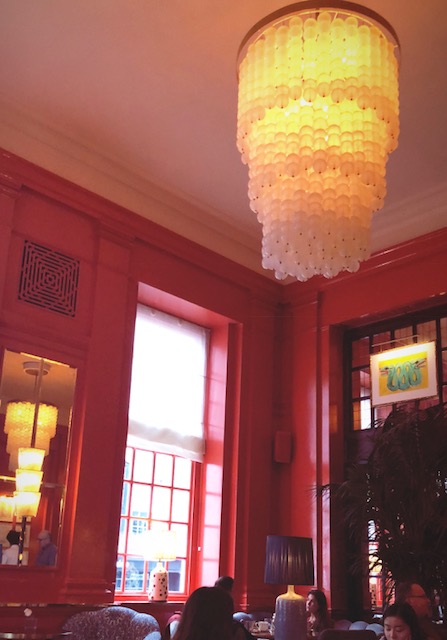 We were warmly greeted by our server, and taken to our fantastic seats, an intimate table with leather couches, making us feel comfortable and relaxed. We were talked through the menu and encouraged that we could change flavours of tea as little or as much as we liked, and there was plenty of choice- as the Coral Room provides around 10 different flavours of tea. Throughout the afternoon we sampled a few, from the more traditional Earl Grey to the oaky more intense flavours of rooibos. These were, of course, provided with fresh tea leaves, and were constantly topped up by the attentive staff ensuring we didn't have to lift a finger.

As the food was served we were provided with the traditional three tiers of sandwiches, scones, and sweets; but on further investigation the ingredients of all three offerings had their own twists. The sandwiches were made with bread that was all baked in-house, including the unique guinness bread which was festively filled with turkey breast, cranberry and radish, which were extremely flavoursome. There were also two afternoon tea staples, the cucumber and cream cheese on basil bread, as well as a smoked salmon and horseradish crème fraiche on pain de mie, but for me, the stand-out sandwich was the roasted pork and apple chutney, which I could have eaten about 40 of. Speaking of gluttony, one of the the Coral Room's afternoon tea's added bonuses was the 'free refill' offering, which was not just limited to tea, but also to one extra plate of sandwiches, which we well and truly took advantage of. 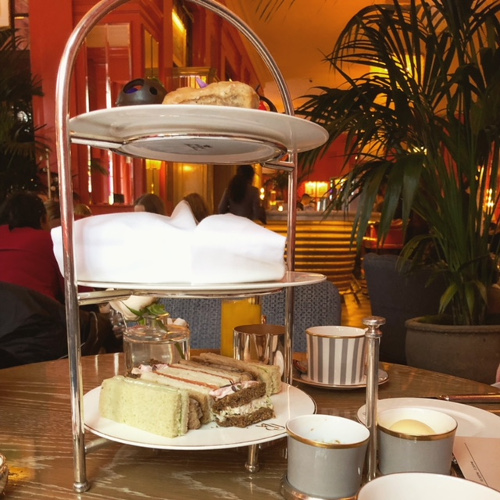 If I'm being honest, the scones are normally my least favourite part of the afternoon tea experience. I do appreciate a good scone, but between the sandwiches and the sumptuous desserts I'm normally ecstatic about- the scones just seem slightly average in comparison. Yet, to me, the scones at the Coral Room were on par, or dare I even say, slightly better than the other two courses. Again, freshly baked in house, you could tell these scones had just been taken out the oven and could smell them before you could see them. There were two flavours, the plain- which was anything but that, and the extra sweet apple raisin scone.

By the time we reached the sweets tier we realised we'd been eating straight for well over an hour, but the desserts looked far too delectable to resist, so we forced (and I use that term very lightly) ourselves to have a taste. 'Just a little of each, to get an idea' was the plan- although before we knew it- the plates were completely empty. Oops. Again, there were four different puddings to sample, the Pendragon red apple terrine, which was a fantastic palette cleanser to get the sweet course started, a chocolate mousse, impressively displayed in a hollow chocolate case and filled with clementine gel and candied chestnut, a spiced financier, a flavoursome cake with a cinnamon glaze, and my personal favourite, the cranberry cream, vibrantly coloured and with a filling to die for. The portions were generous but not overwhelmingly huge, and completed the experience perfectly. 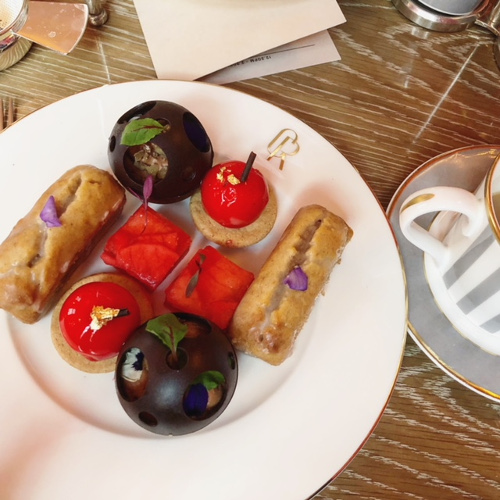 Overall, the Coral Room provided the perfect afternoon tea experience, and everything there was truly authentic. With 5-star service and high-quality food, this was a great afternoon which could be enjoyed in a couple or larger group, with no-one being left hungry.

More about The Coral Room at The Bloomsbury