His story is the inspiration behind the Broadway musical that has taken the world by storm and now the life and times of one of America's founding fathers, Alexander Hamilton, has inspired the latest Afternoon Tea offering at The Lanesborough Hotel.

The AfternoonTea.co.uk team got an exclusive behind the scenes tour from head pastry chef, Gabriel Le Quang, and the opportunity to taste this inventive new Afternoon Tea. 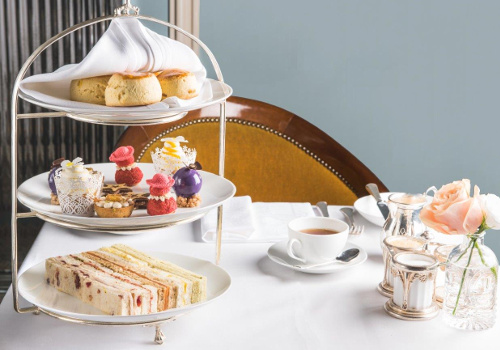 The Lanesborough is situated on the edge of Mayfair and Knightsbridge, and you will pass several historic London landmarks on any route you decide to take to reach the hotel.

Our journey involved a relaxing stroll through Green Park, followed by a not so relaxing route crossing the 7(!) lane roundabout of Duke of Wellington Place, before we arrived at the elegant hotel overlooking Hyde Park Corner.

The building has a rich history and was opened as St George's Hospital in 1733 on the site of the former home of Viscount Lanesborough, before it was transformed into a 5-star luxury hotel in 1991. This spectacular grade II listed building is designed in a neoclassical style and has the feel of a Regency mansion, something immediately apparent by the opulent pillars that stand each side of the grand doors at the entrance. 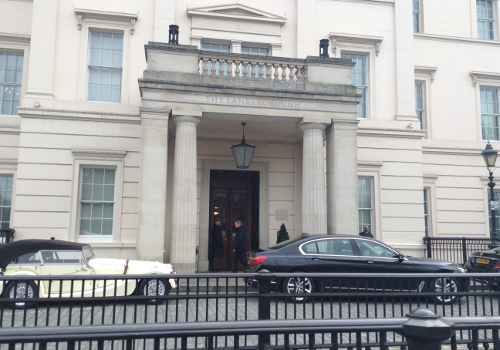 We arrived on the day that the hotel was hosting an event for the Balvenie whisky company, and the sight of the famous Speyside distillery's classic white sports car only added to the majesty of the hotel welcome.

The Victoria Palace Theatre is located just a short distance down the road, and The Lanesborough have themed their sweet plate to celebrate the opening of Lin-Manuel Miranda's global phenomenon, 'Hamilton', on this stage.

So, how does a luxury London hotel go about theming an Afternoon Tea after the Caribbean born orphan, who grew from squalor to scholar and became one of the key figures in America's independence?

Luckily, we had the chance to chat with the perfect man to answer this question in Gabriel Le Quang, the hotel's recently appointed head pastry chef who greeted us in the hotel's magnificent Celeste restaurant, before taking us on a tour of the kitchens. 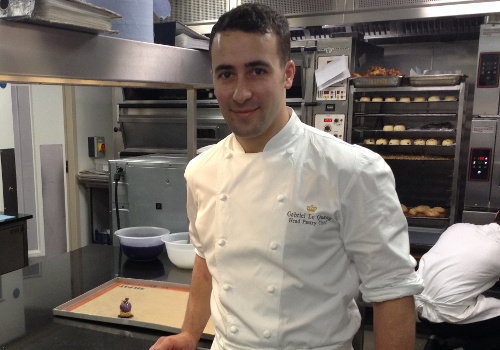 The Fontainebleau born chef told us that the key to creating the menu involved a lot of demanding work and extensive research.

He said: "I looked up pictures, videos and learnt the history of the musical. I printed the pictures that inspired me, and brainstormed with my Sous Chefs and the wider pastry team in order to achieve the end result."

Whenever he is discussing the thought process behind the Afternoon Tea, Le Quang is always keen to stress the importance of teamwork in the construction of the Afternoon Tea menu. "I could not do this without the whole team. The entire pastry team collaborated with their ideas. We then had to choose what we felt were the winners. I worked very closely with one of my Chef De Partie, shaping their idea for the pecan pie, trying many different recipes, as well as my Sous Chef, to reach the result on the final menu." 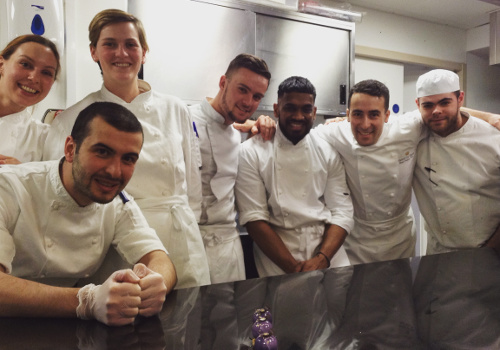 Teamwork is a quality that Le Quang has placed a huge importance on throughout his career, clearly valuing the advice collected throughout his culinary journey that has included stints working with talented chefs such as Johan Martin, Quentin Bailly, Julien Alvarez and Lilian Bonnefoi.

He said: "Each of them really inspired me to continue to improve every day with their passion and support; they have all been wonderful mentors and I would not be where I am if it was not for them."

Le Quang has gathered a wealth of experience in a career dedicated to pastry that began as a 17-year-old working at a Parisian restaurant. From here, Chef Le Quang undertook official training at Arnaud Delmontel's pastry shop before moving into fine hotel dining at luxury French hotels and then to London to become Head Pastry Chef at the prestigious Lanesborough.

The pastry kitchen at a venue as grand as The Lanesborough during a busy Afternoon Tea session is understandably hectic and it is fascinating to see the pastry team operate in this dynamic environment.

We got the opportunity to watch the chef prepare his personal favourite pastry of the Afternoon Tea, a blackberry cheesecake designed in the style of Alexander Hamilton's purple suit. Even as an observer, it is a challenge to keep up with the speed at which the pastry is crafted. Each member of the team is working efficiently, at an incredibly fast pace amidst the hustle and bustle of the kitchen, like a finely tuned machine. 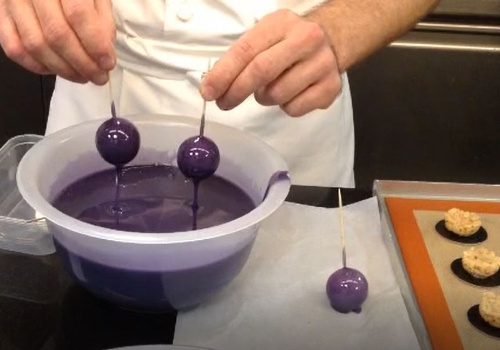 The process begins with a biscuit base being placed on a baking tray before a member of the team comes over with balls of cheesecake mousse and a vat of deep purple blackberry sauce. Chef Le Quang then proceeded to dip the cheesecake mousse into the gloopy sauce to give the pastry its special gloss. The sauce looked delicious and it was difficult to resist an overwhelming temptation to grab a spoon and try some for myself! 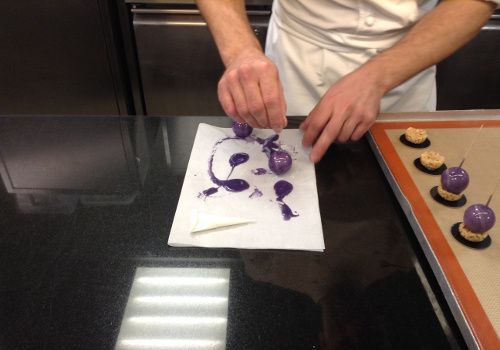 The Sous Chef decorated the pastry with a fine white line to represent the edges of Alexander Hamilton's suit, before Chef Le Quang carefully placed each cheesecake ball onto the biscuit base. Meanwhile, another member of the team was putting the finishing touches to the chocolate bow that symbolises the brown breaches on Hamilton's suit.

Upon completion, Chef Le Quang carefully assembled the components, creating a pastry that was truly a fine work of art! 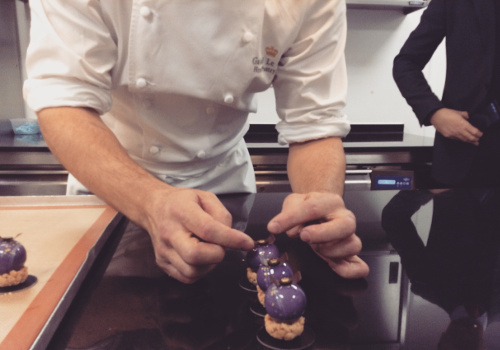 After a quick browse around the rest of the kitchen, where we could see the sumptuous array of scones baking in the oven, it was time for us to make our way back to the Celeste Restaurant to enjoy the Alexander Hamilton Afternoon Tea.

We were seated on the balcony section overlooking this beautiful Michelin-starred restaurant, that is bathed in a gorgeous natural light provided by the stunning domed glass ceiling. 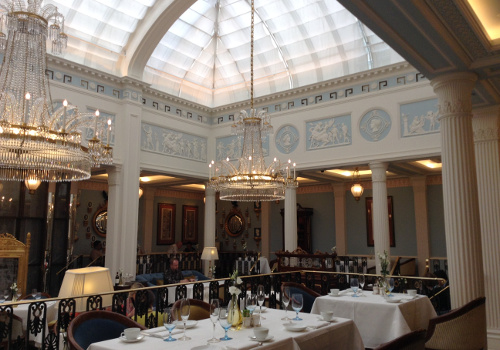 Our Afternoon Tea experience began, as it always should, with a luxurious glass of Champagne! The NV Taittinger Brut Reserve Champagne provided a refreshingly crisp finish that whet the appetite for the plate of finger sandwiches that had just been served to our table. 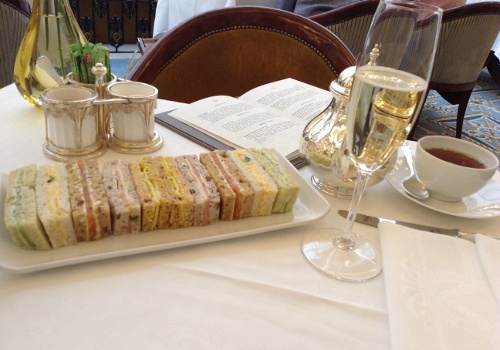 The range of sumptuous finger sandwiches included classic fillings such as coronation chicken - befitting the venue's traditional regency heritage. However, each sandwich contained an additional element to elevate it into something beyond the traditional. An example of this was how the coronation chicken was expertly served on a fruit bread, that perfectly complimented the sultanas in the filling.

Indulging in a range of traditional sandwiches while sitting in such quintessential surroundings felt like we were enjoying the great British tradition in its purest form. Chef Le Quang's formal training was in France, and he says that there was an adaptation process in transferring from Paris to London. British fine dining culture is full of nuances and researching Afternoon Tea service was a big part in Chef Le Quang successfully adapting to his new surroundings. To gain an appreciation of why Afternoon Tea has such a timeless appeal over guests, Le Quang went on several scouting missions to luxury hotels across the capital, to see how it is served.

He concluded: "Afternoon Tea creates a very particular ambiance. It is a relaxed and enjoyable time of the day, with music, finger sandwiches and a selection of small desserts to be consumed without the pressure of time."

After polishing off the sandwich plate, it was time to enjoy the sumptuous range of sweet treats, which came served on a classic three-tiered stand. 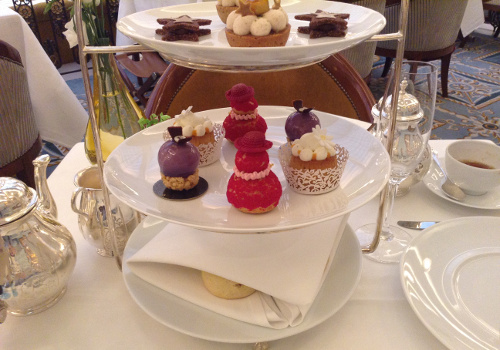 We started from the bottom with the plate of scones - the classic 'bone of contention' amongst Afternoon Tea enthusiasts - clotted cream or jam on the scone first? Chef Le Quang's view on this is "it is purely a personal preference; my own preference is clotted cream first, jam second."

We went with the chef's preference, opting for the Devonshire method, before tucking in to this iconic British sweet treat. The scones were perfectly presented with a glowing finish and they tasted equally delicious, with a wonderfully fluffy and moist texture. 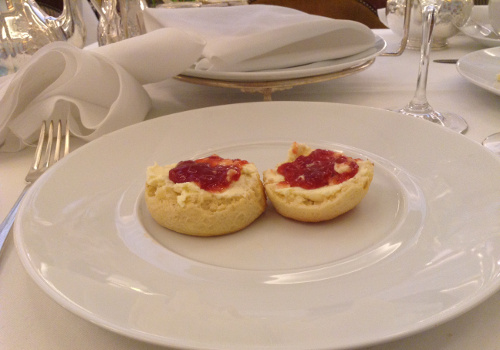 The tea selection is vast, and we required the help of our friendly server, Raffaella, who was more than happy to provide us with sound advice on selecting the right tea. We eventually decided on two teas with contrasting taste profiles - a strong full-bodied Assam and the Cinnamon Star, a sweeter blend that packs a lovely aroma and spicy kick.

Once we finished the scones, it was time to move on to the Alexander Hamilton inspired sweet plate. To remain true to the theme of the American revolutionary, Chef Le Quang has crafted a selection of contemporary pastries designed in the style of classic American desserts, featuring tropical flavours that pay tribute to Hamilton's Caribbean heritage.

Each pastry is perfectly presented as motifs from Alexander Hamilton's life such as a grapefruit religieuse in the shape of his sister-in-law, Angelica Schulyer. This pastry is complete with a pink craquelin bonnet and is filled with pomelos cream and Chantilly, which unleashes a tantalising grapefruit explosion in your mouth. 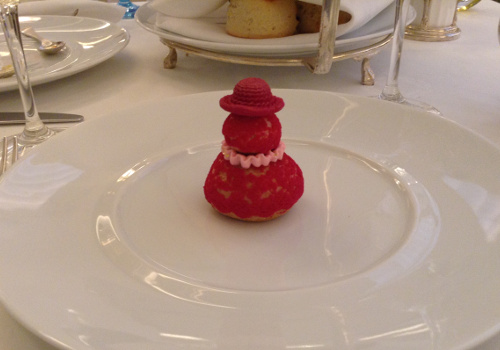 We were particularly excited to tuck into the blackberry cheesecake that we witnessed Chef Le Quang prepare, and it certainly did not disappoint. The pastry was the most visually striking of the Afternoon Tea and it had the substance to back it up. The rich cheesecake mousse was perfectly juxtaposed by the crunchy biscuit base to create a fantastically balanced treat. 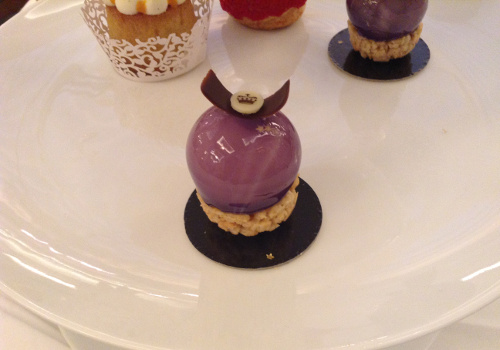 We saved our personal favourite until last, which was the Caraibes Chocolate Star. This chocolate shortbread is shaped in a visually distinctive style to echo the star from the logo of the musical, as well as the stars on the American flag. Chef Le Quang worked at the luxury chocolatier, Valrhona, for a period of his career and he utilises ingredients from this famous company by garnishing the shortbread with a Caraibes 66% Valrhona ganache. The quality of the ingredients is evident as the chocolate delivers a bitter bite that lingered on my pallet for a while after the Alexander Hamilton experience had finished. 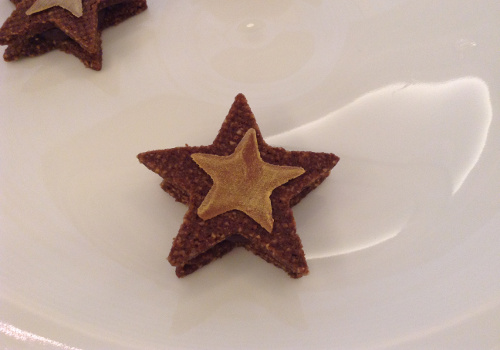 The final song of 'Hamilton' asks 'Who Lives, Who Dies, Who Tells your Story?' In this case, the answer to that question is Gabriel Le Quang and the talented team at The Lanesborough, who have captured Alexander Hamilton's story in the form of this wonderfully unique Afternoon Tea.

If you are one of those lucky few who have managed to get your hands on tickets for 'Hamilton', then this experience at the nearby Lanesborough Hotel will make for an ideal pre-theatre treat.

The Alexander Hamilton Afternoon Tea is priced from £39 per person and is available until April 8th.