If you find yourself close to Old Trafford Stadium in search of an Afternoon Tea – maybe after a tour of Manchester United’s home, a visit to the Imperial War Museum North or some retail therapy in the Quayside shopping centre, Cafe Football might be just the place. Part of Hotel Football it is located just a hop and a skip away from the stadium beside the Bridgewater Canal. Parking is available, but it is across the road, so look up directions to the Hotel Football car park, rather than the hotel itself, if you are driving. You’ll have to buzz reception to be let into the car park, just let them know you are there for the Afternoon Tea and they’ll let you in. (Don’t forget to request the current code to get out of the car park from the desk as you leave!) If you are on public transport, the Exchange Quay station on the blue line of the Metrolink is only about a 10-minute walk away. 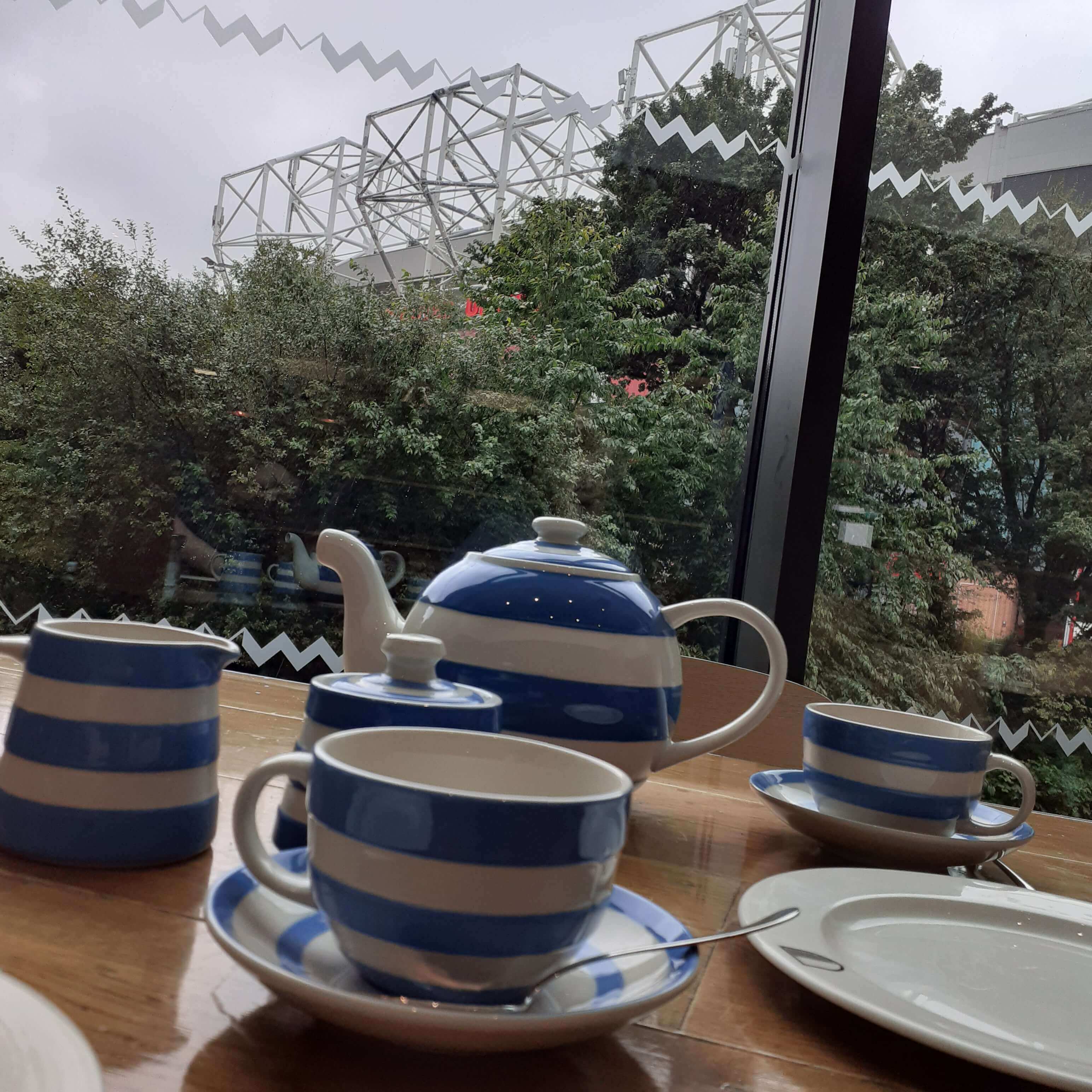 The venue is dominated by a glass wall looking out onto the canal and the stadium and it is very welcoming, with good service and friendly atmosphere even on the grey and rainy day we visited. There are two different Afternoon Tea menus to choose from on booking: the Home Game (which focuses on savouries) and the (more traditional) Away Game. We went for one of each to try them both – and it turned out to be a perfect combination of food.

We were seated immediately and asked whether we wanted tea or coffee, with a massive pot of tea arriving within minutes to help warm us up after the drizzle outside. The stripey tea service was a nice nod to football. Some of the servers were wearing blue football shirts, and when we asked why they weren’t red (given the proximity to the home of Manchester United), our server explained that this is Hotel Football and not Hotel United (although on Match Days, they do wear red) – and the shirt wasn’t from a club, but rather using the football shirt look with the Hotel Football logo. 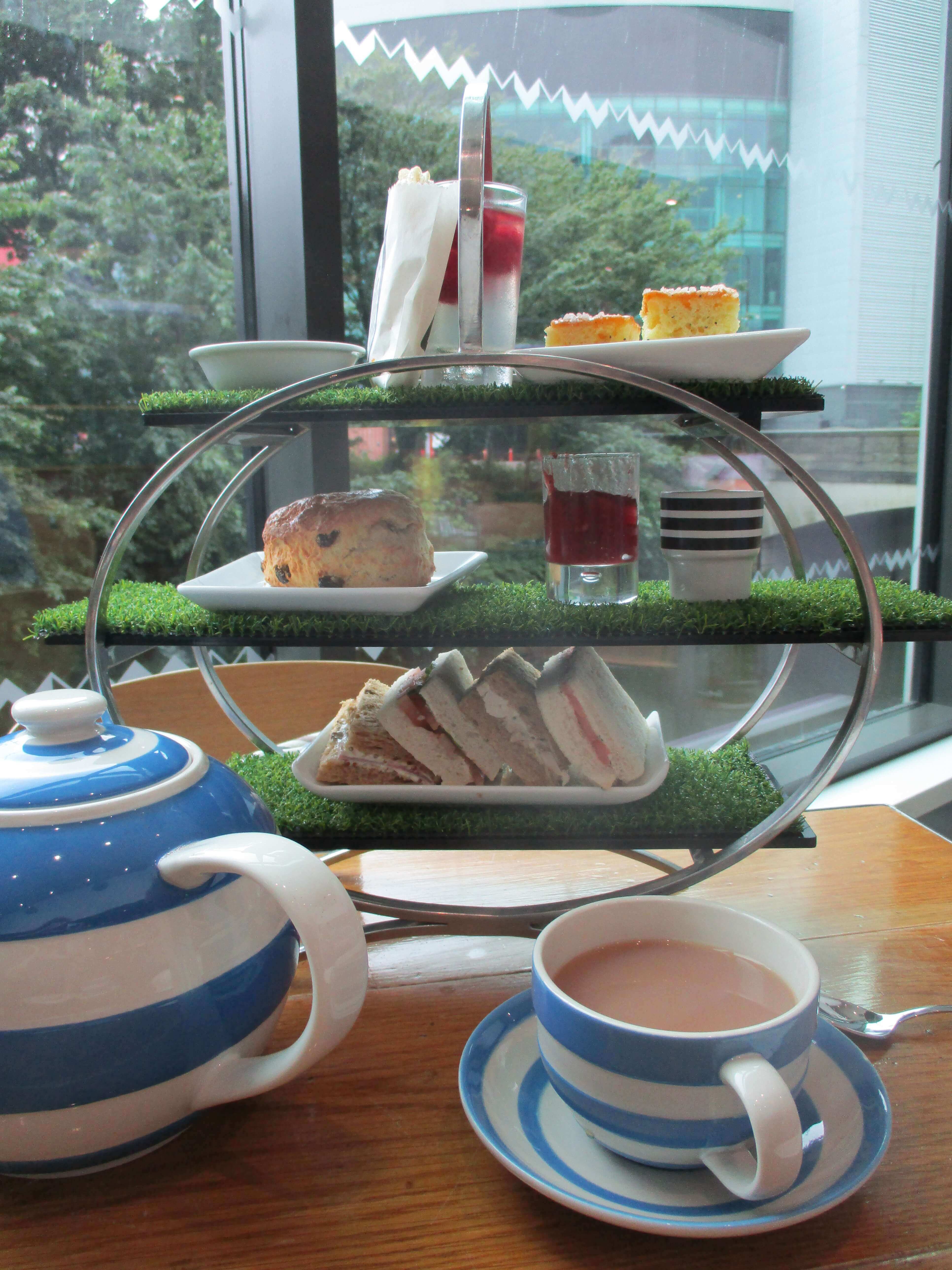 Soon after two stands with the respective Afternoon Teas arrived (the different tiers sporting some Astroturf, another nice nod to a football theme). We both wanted to try everything, so we worked in the order of savouries, then scones, then sweets through the food and split the items when necessary. We began with the hot food on the Home Game menu – mini Yorkshire pudding with beef and gravy, mini fish and chips and a sausage roll swirl. Nowhere near as small as ‘mini’ suggests, they were all delicious and a perfect start to the meal. The Home Game menu also comes with a mini glass of Café Football beer, brewed locally in Salford by Seven Bro7hers, a great addition to both the hot food and the sandwiches. 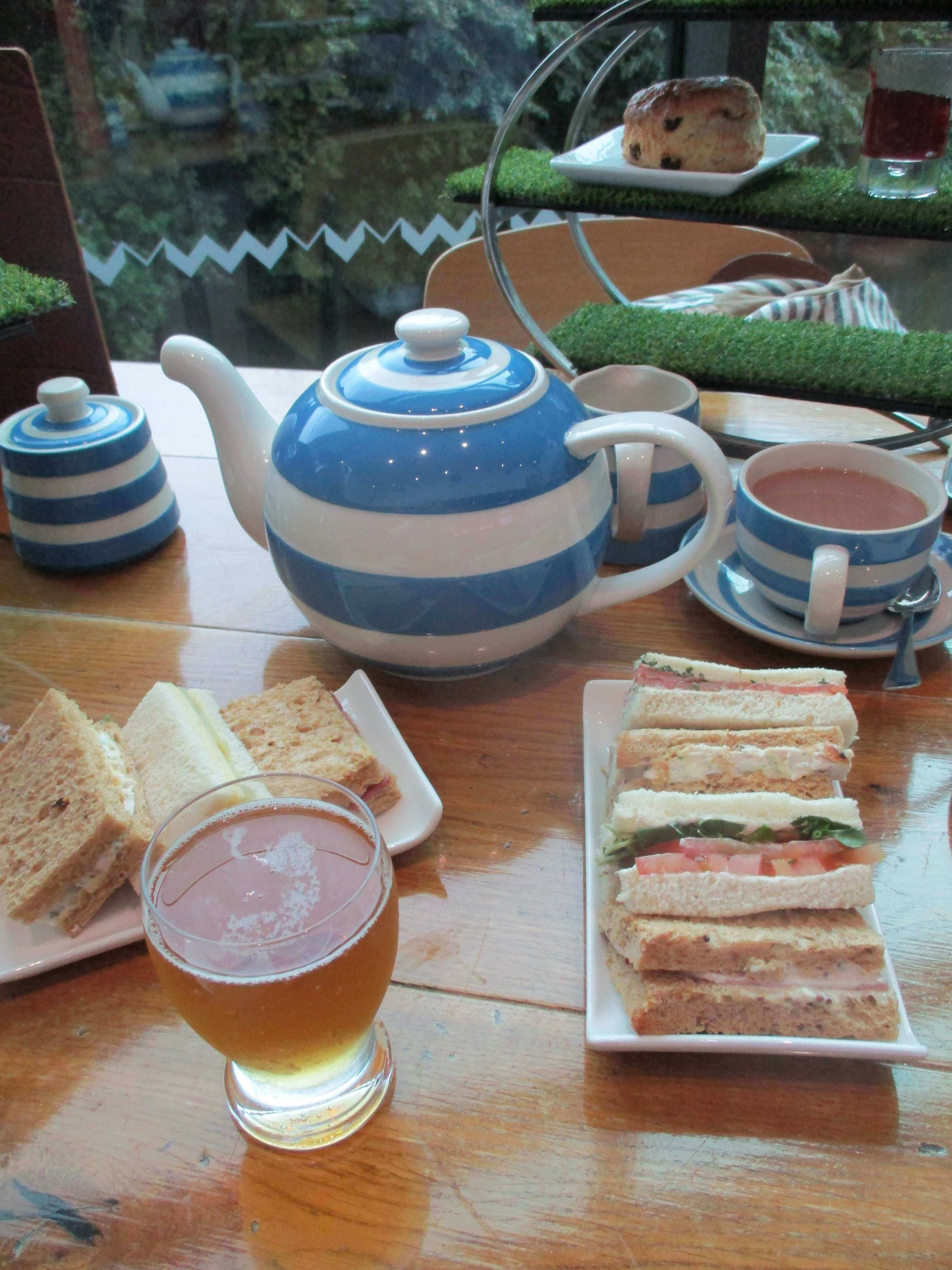 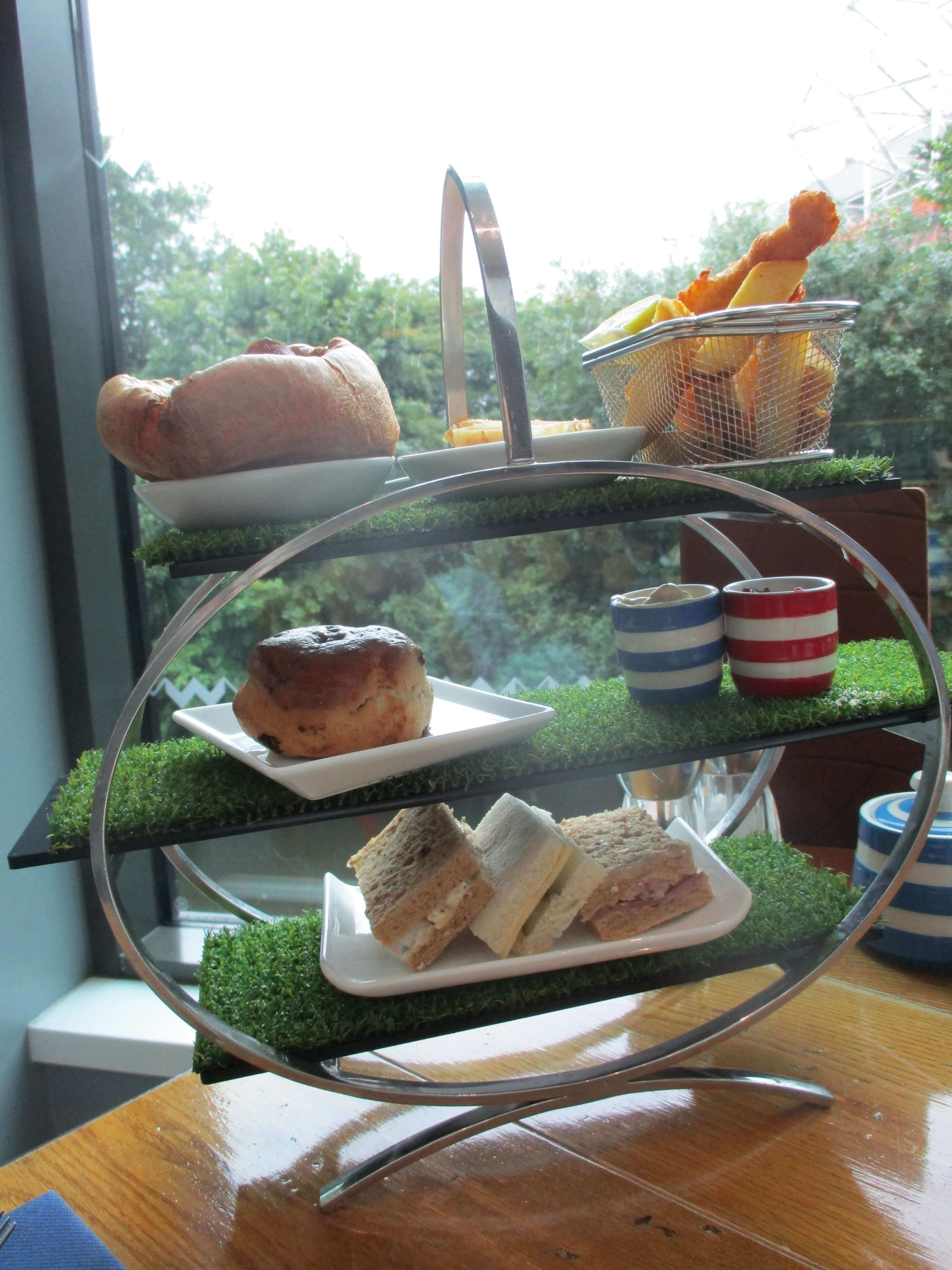 There was a nice selection of sandwiches (both menus include sandwiches, but they include different kinds). An unexpected favourite here was the Pastrami and Sauerkraut from the Home menu, but really they were all very nice.

The scones were a perfect size – not tiny bite-sized nor too massive to face after a round of sandwiches – and the clotted cream and jam came in lovely little pots.

We moved on to the sweets (which are exclusive to the Away Game menu) and started with the prosecco jelly (with raspberries), which was just the fruity, tart note we needed to cut through the sweetness of the creamy, jammy scones. It was great to have this version of a bit of a tipple included as a counterpart to the beer on the other menu. After a delicious square of lemon poppy seed cake, we ended on churros with chocolate sauce for dipping. And even though they were cold by the time we ate them (we were on our second massive pot of tea by now), the churros were both of our favourites – we could only imagine how super delicious they must be when eaten hot! 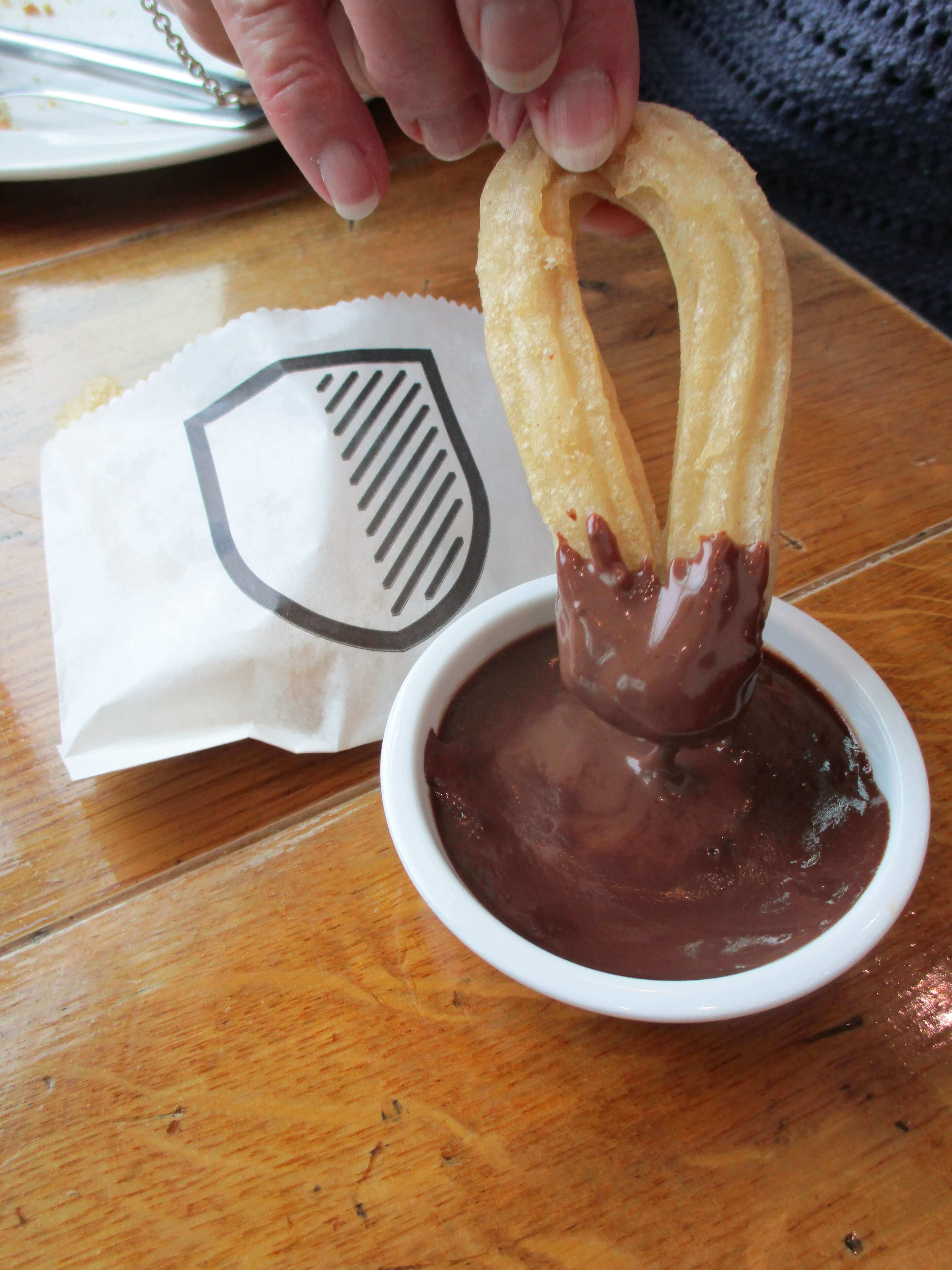 Overall, the details were spot-on and thoughtful, but not overly fussy – there was none of the ‘over-theming’ you sometimes get that could have ended up as lots of mediocre food with footballs on top. Instead, all the food was super tasty, the churros, the Yorkshire pudding and the prosecco jelly were our stand-out items. The staff was lovely, topping up tea, getting fresh plates and being just overall super friendly. A perfect way to spend a rainy afternoon, just note that Afternoon Tea needs to be pre-booked – and is not available on Match Days!

Free Online Booking
Please note that Afternoon Tea is served from 12pm - 5pm and must be booked in advance with a pre-order. Kindly quote how many 'Home' and/or 'Away' Teas you will require in the special request section of the booking notes. Afternoon Tea is not available on match days which are subject to change.
Book Now