Book Afternoon Tea at The Beaumont

It has been a good few years since I visited The Beaumont in Mayfair, when it first opened in 2014 just off Brown Hart Gardens, one of my favourite (not so hidden) hidden gems in London, where I frequent regularly before dance class. Fitting in with its sophisticated surroundings in the heart of Mayfair, this five-star hotel certainly oozes luxury the moment you walk through the revolving doors, its stylish Art Deco-style interiors reminiscent of the glamorous 1920’s.

The great British ritual of Afternoon Tea is served in Gatsby’s Room, the beating heart of the hotel, where striking art pieces line the walls alongside vintage bookcases that conceal hidden rooms and passages – the one that led to the ladies was particularly handy! There was also a pianist playing music in the background which certainly livened up the atmosphere. 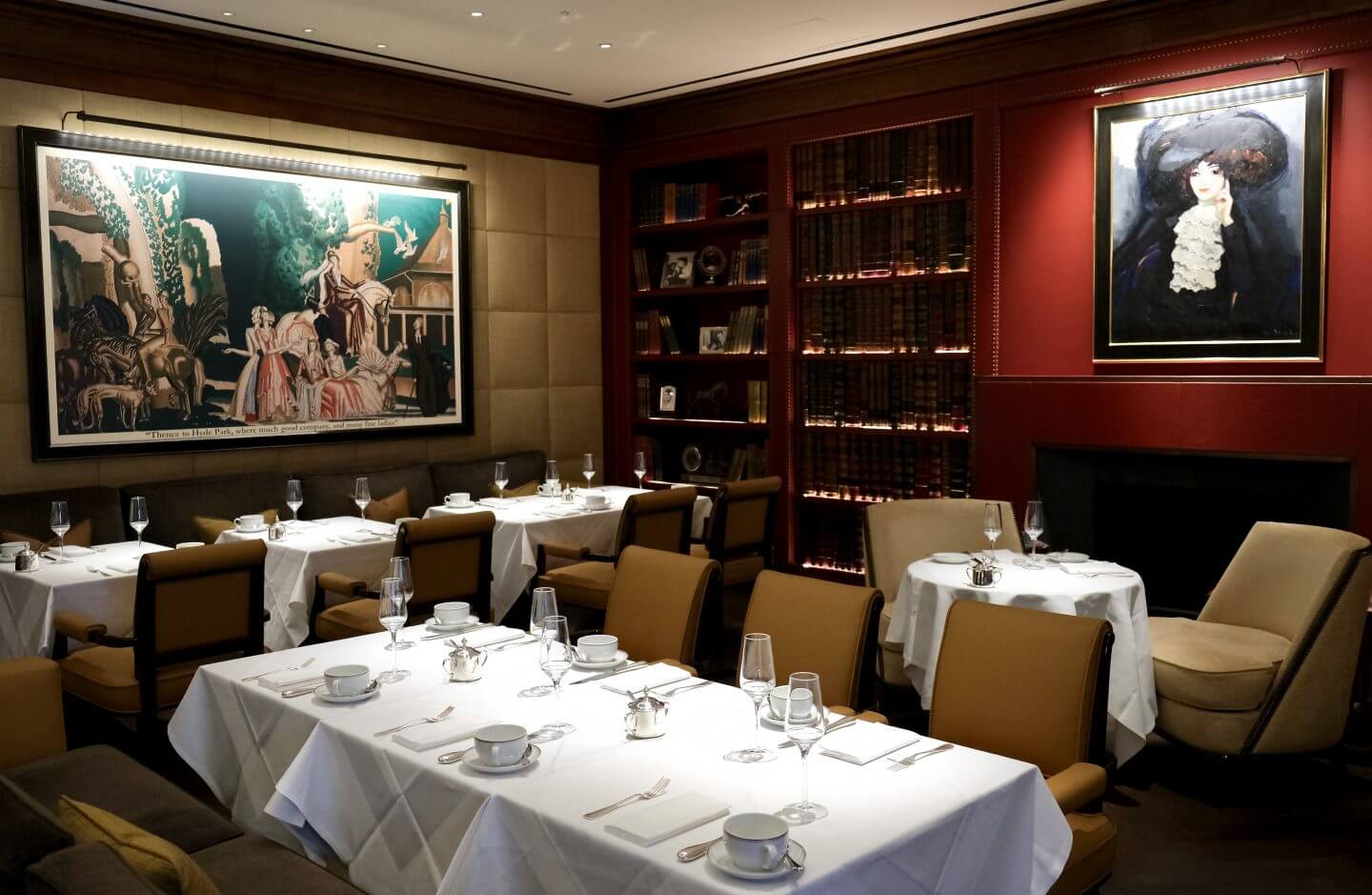 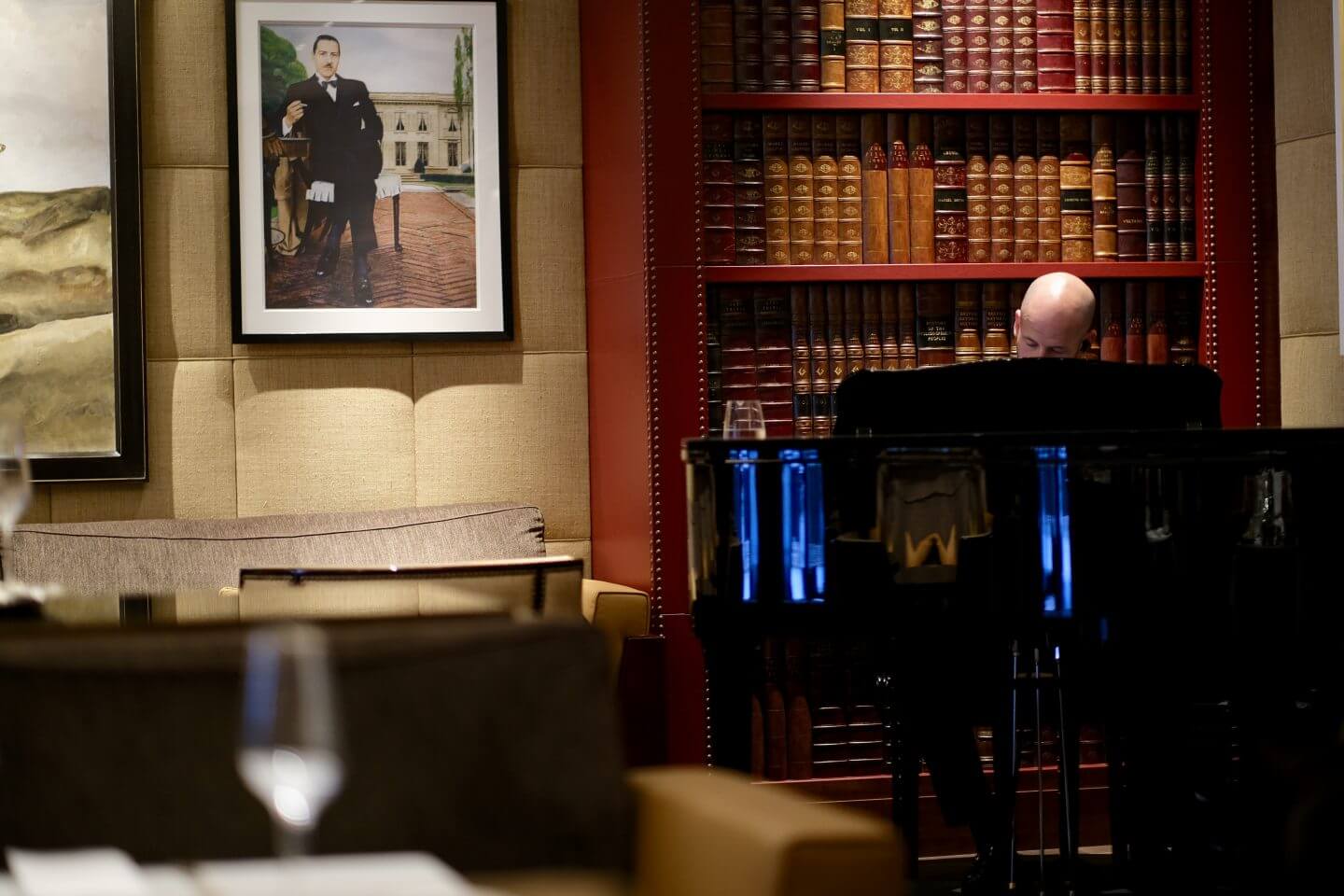 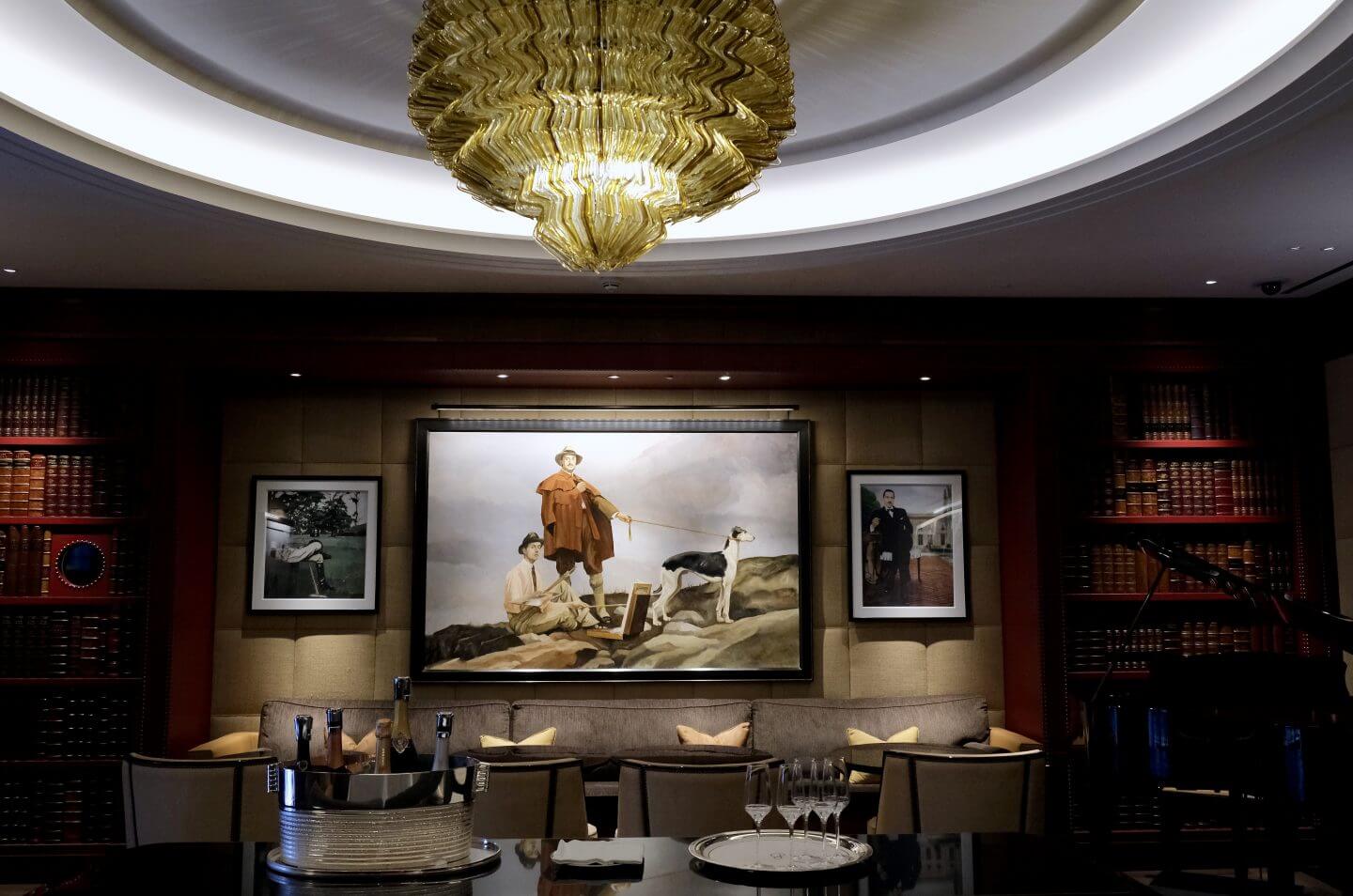 Never one to decline a glass of bubbly, we both obliged to begin with a glass of 2016 Gusbourne Rosé, a crisp and slightly floral English sparkling rosé from the highly regarded Gusbourne Estate in Kent.

To complement their elegant afternoon tea menu, they have partnered with JING Teas which offers a variety of characterful single garden teas which have distinctive flavours and aromas shaped by their origins and the skills of those who produced them.

For our tea selection, we both started with a pot of their Organic Darjeeling 2nd Flush, grown in the foothills of the Himalayas; a light and fragrant black tea with grape sweetness and notes of toasted hay and hops. Always in the mood for a bit of variety, we later requested for a fresh pot of rich and malty Assam Breakfast tea which also went down really well. 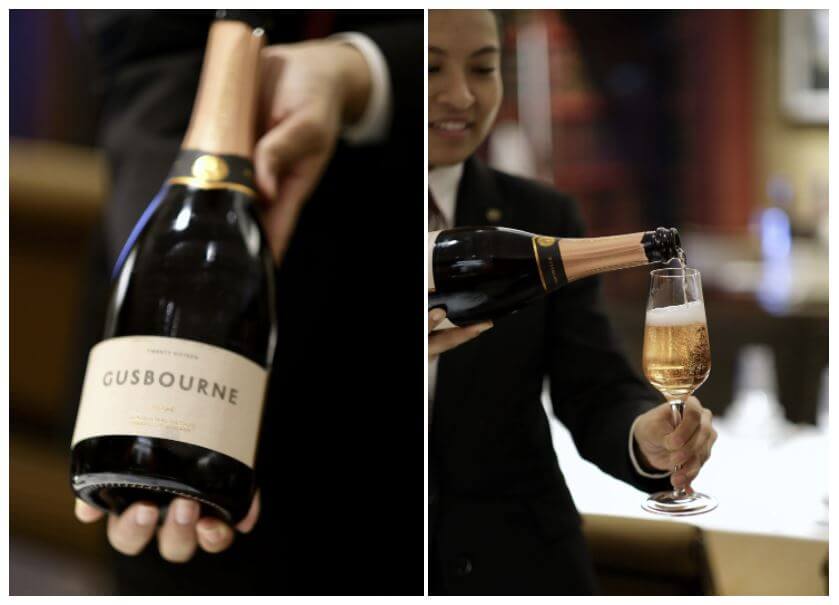 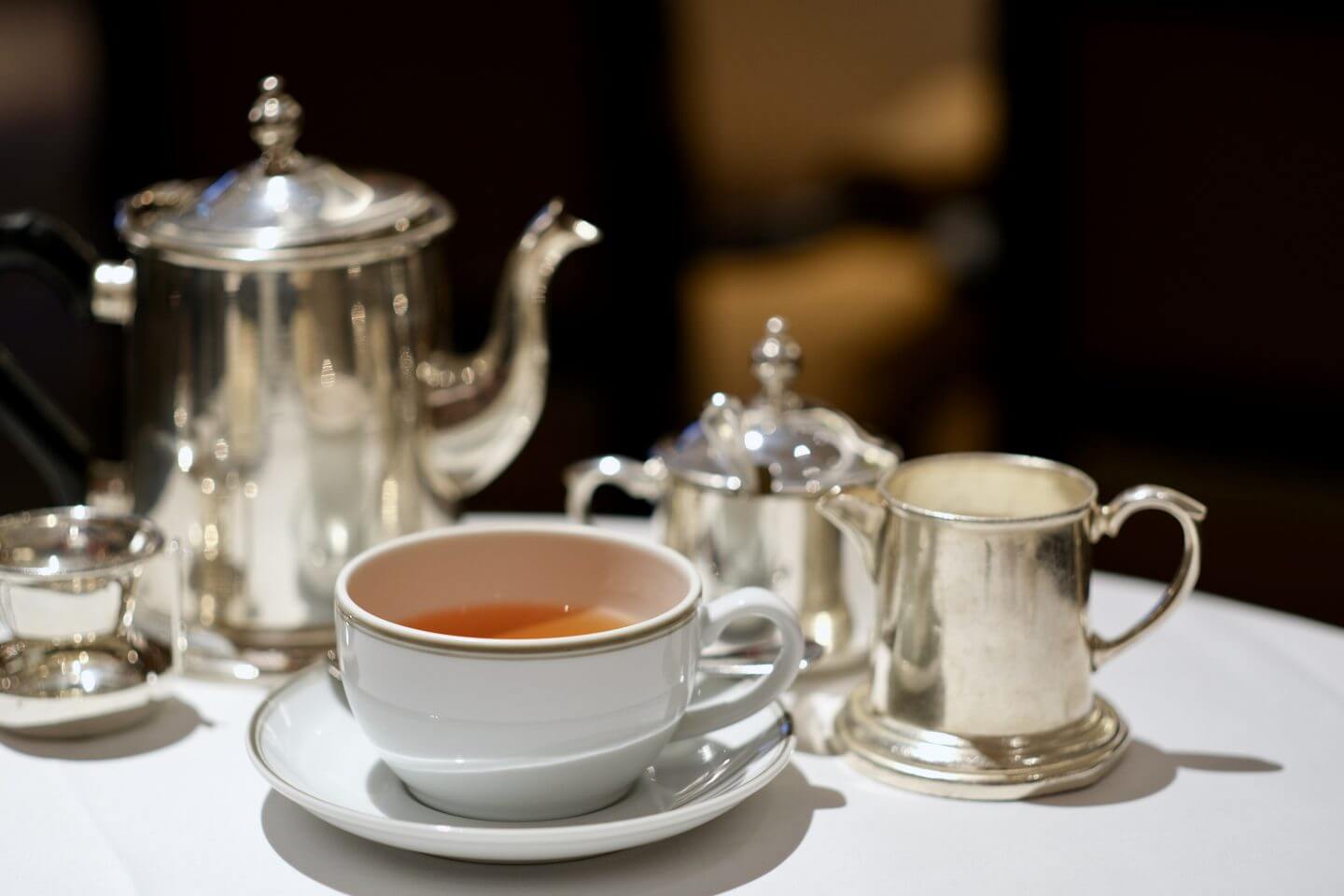 The sandwiches were first served on individual plates prior to the arrival of our two-tiered silver stand which carried the freshly baked scones and sweet pastries. Our first course of savoury sandwiches included an appetizing selection of fillings: smoked chicken Caesar, Reuben salt beef, devilled egg, and my favourite of them all, the smoked salmon and cream cheese, a classic combination which for me often outshines its peers on the majority of occasions. The plain and raisin scones were served warm from the oven and were light and fluffy, just the way I like them, accompanied by Cornish clotted cream and strawberry preserve. 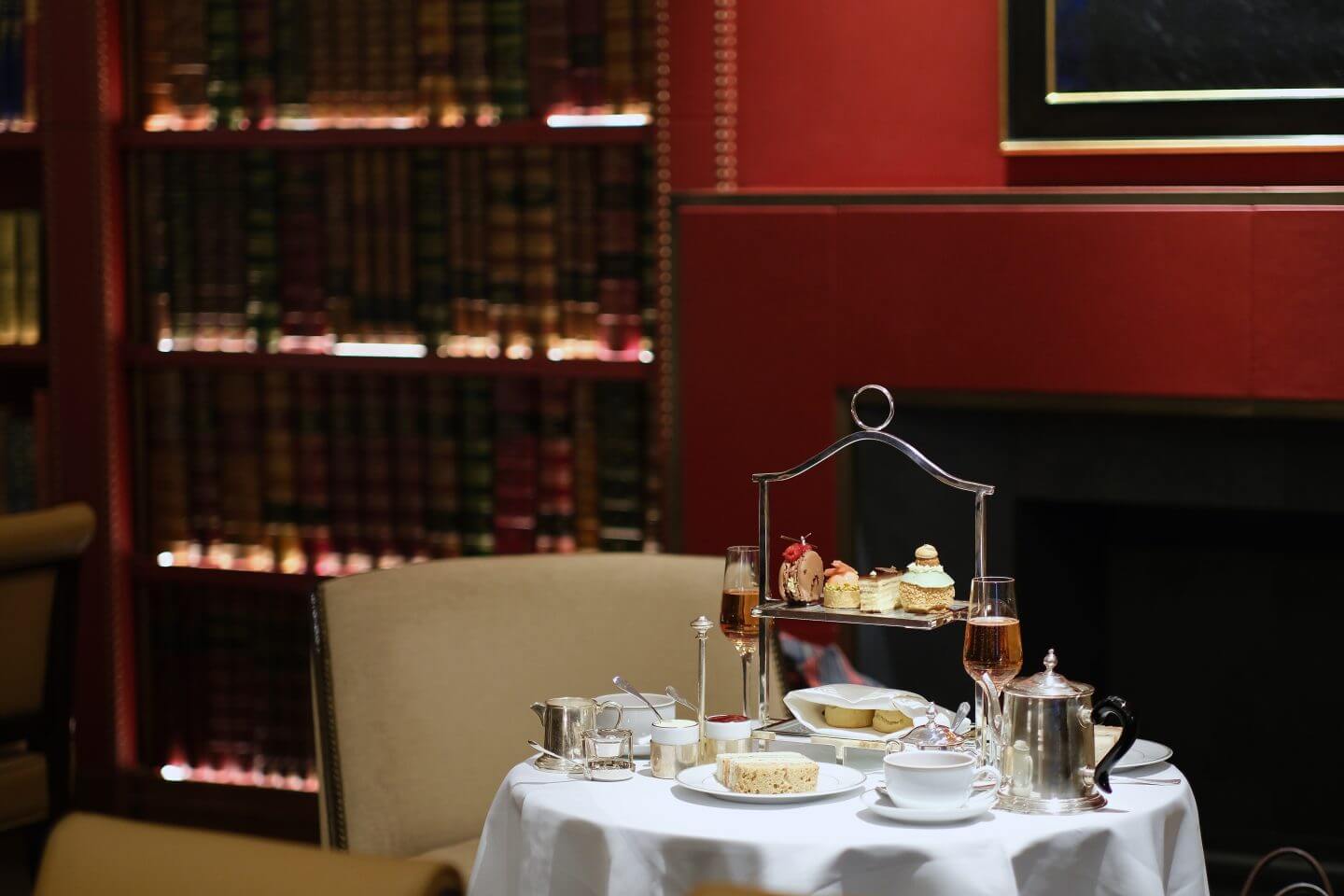 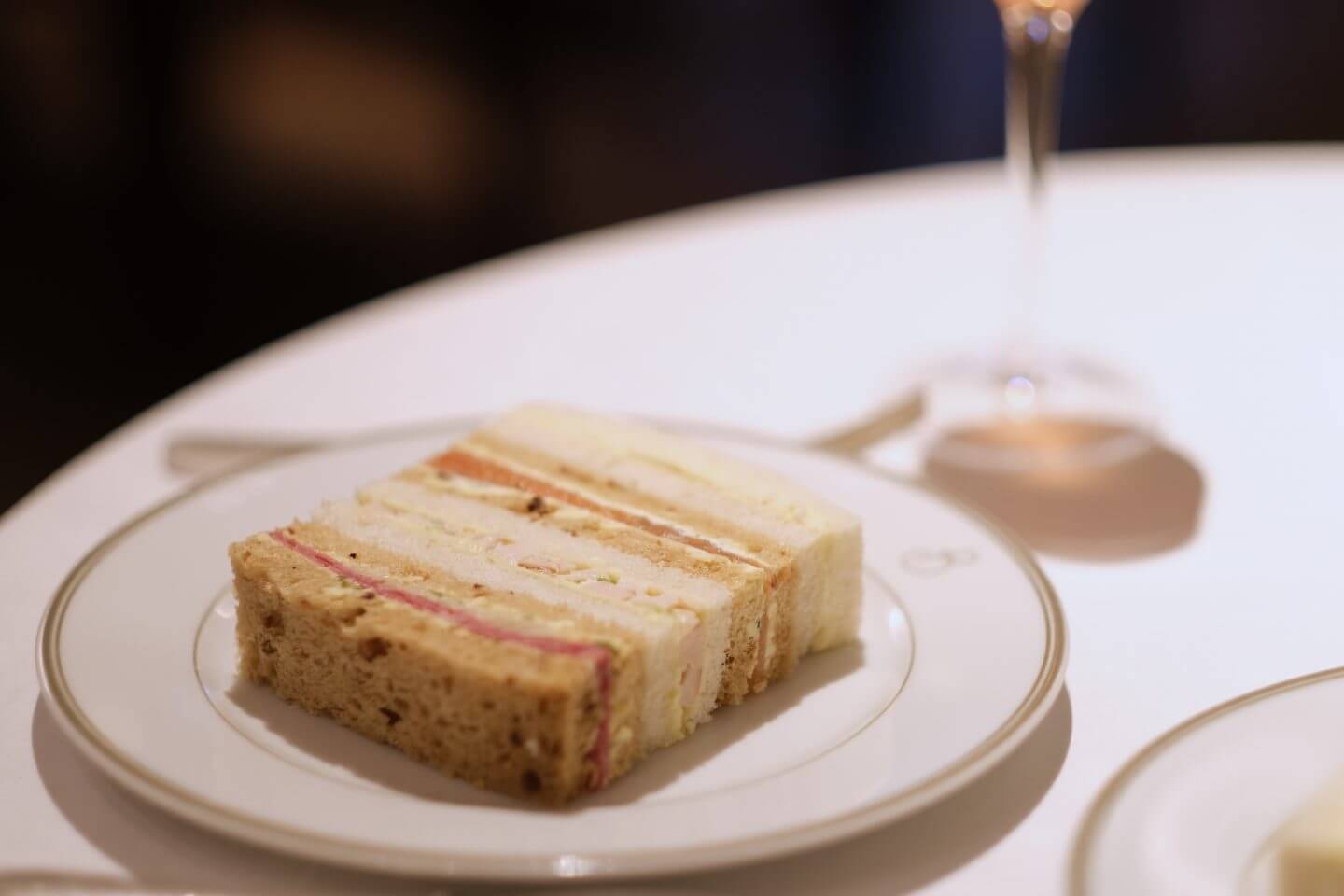 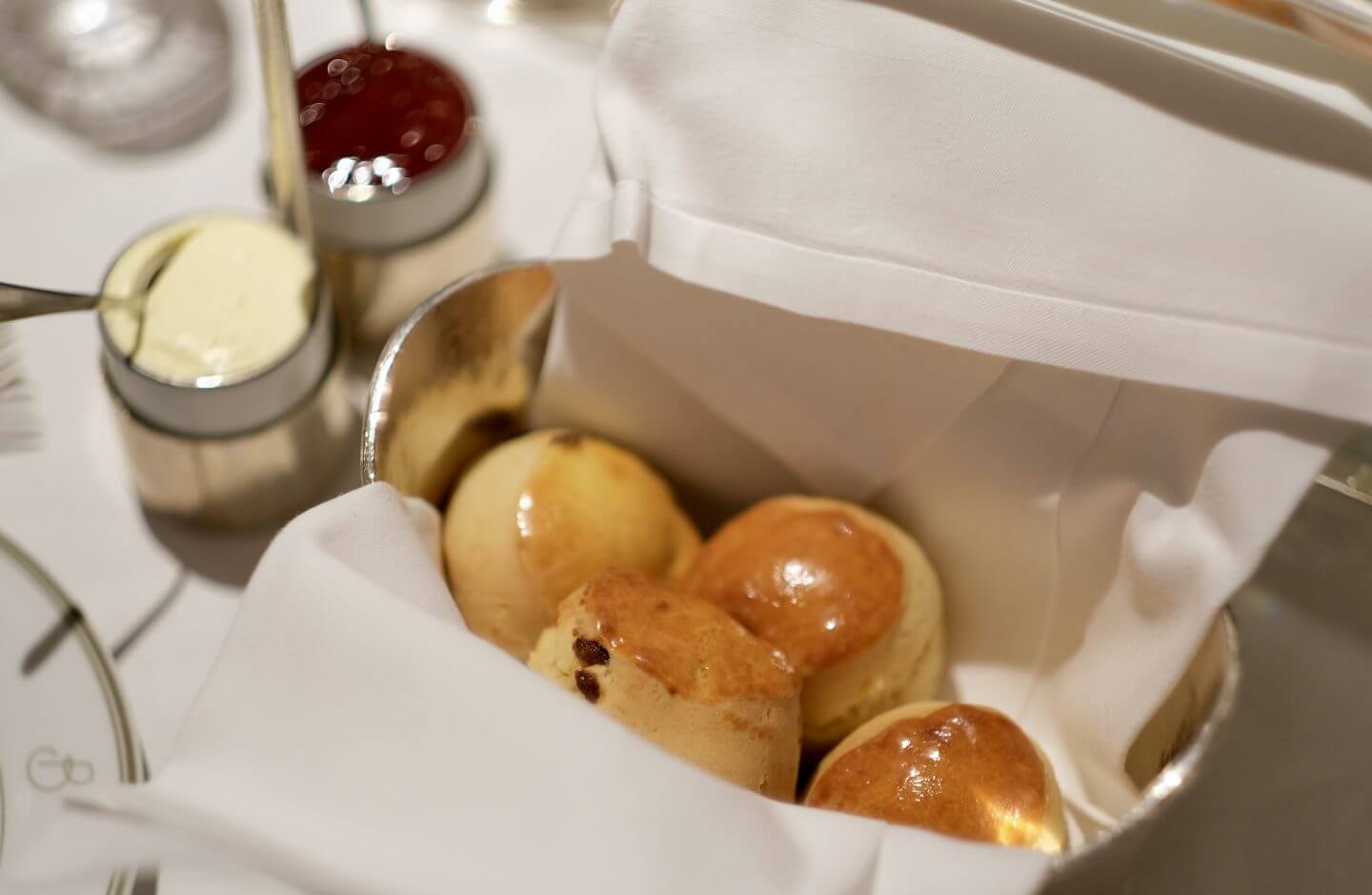 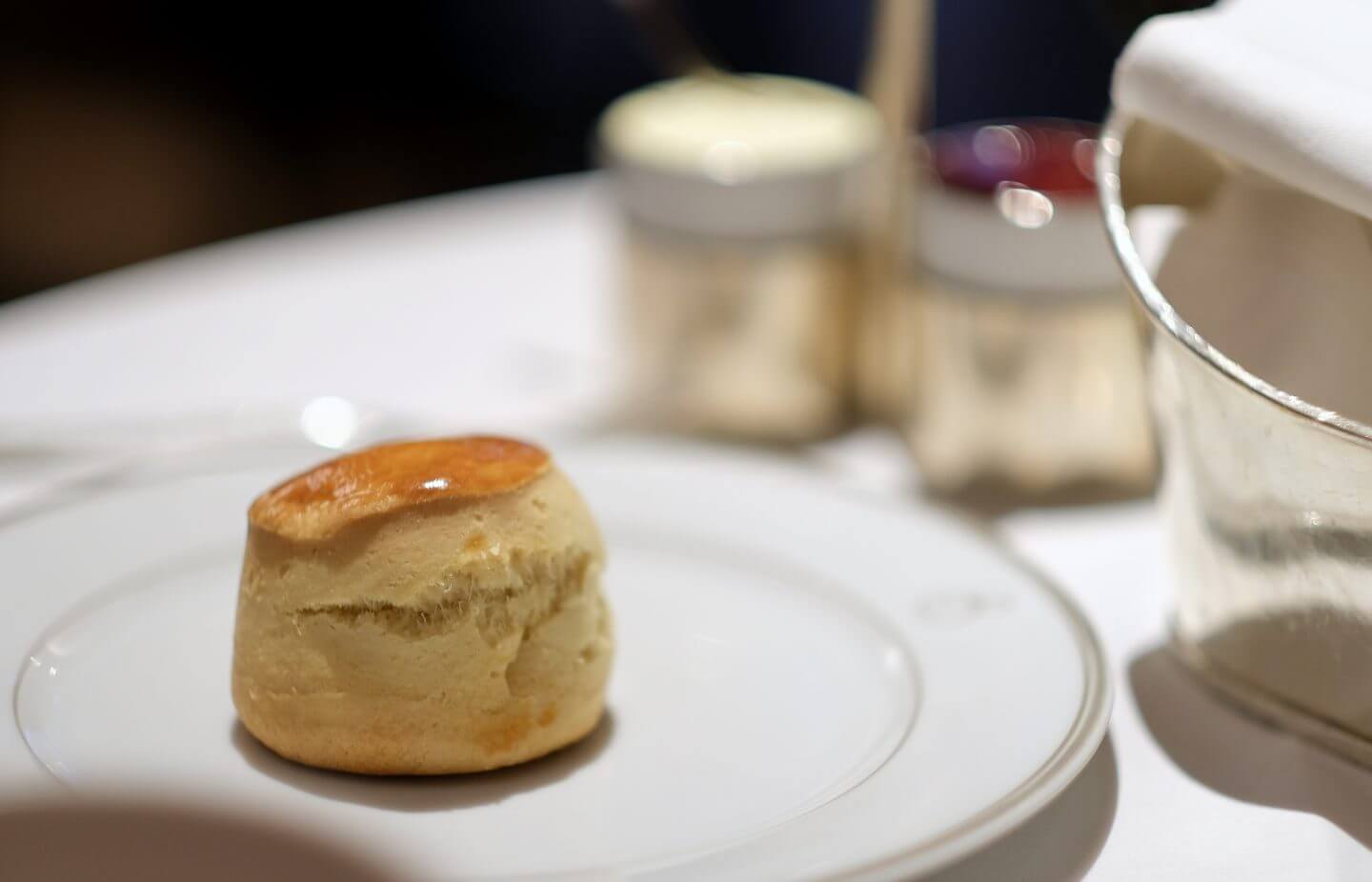 Finally on the top tier laid four enticing miniature desserts which truly embraced the Gatsby theme; a Key lime & Matcha Religieuse, a vanilla cheesecake with a rhubarb glaze topped with poached rhubarb, a peanut butter & jelly chocolate macaron, and a Boston cream pie, which is technically not a pie as its name suggests but rather a classic cake with a cream filling and a rich chocolate glaze. The origin of the name dates back to a time when cakes and pies were cooked using the same pans, and the words were hence used interchangeably – who doesn’t love a bite-sized piece of history with their Afternoon Tea? 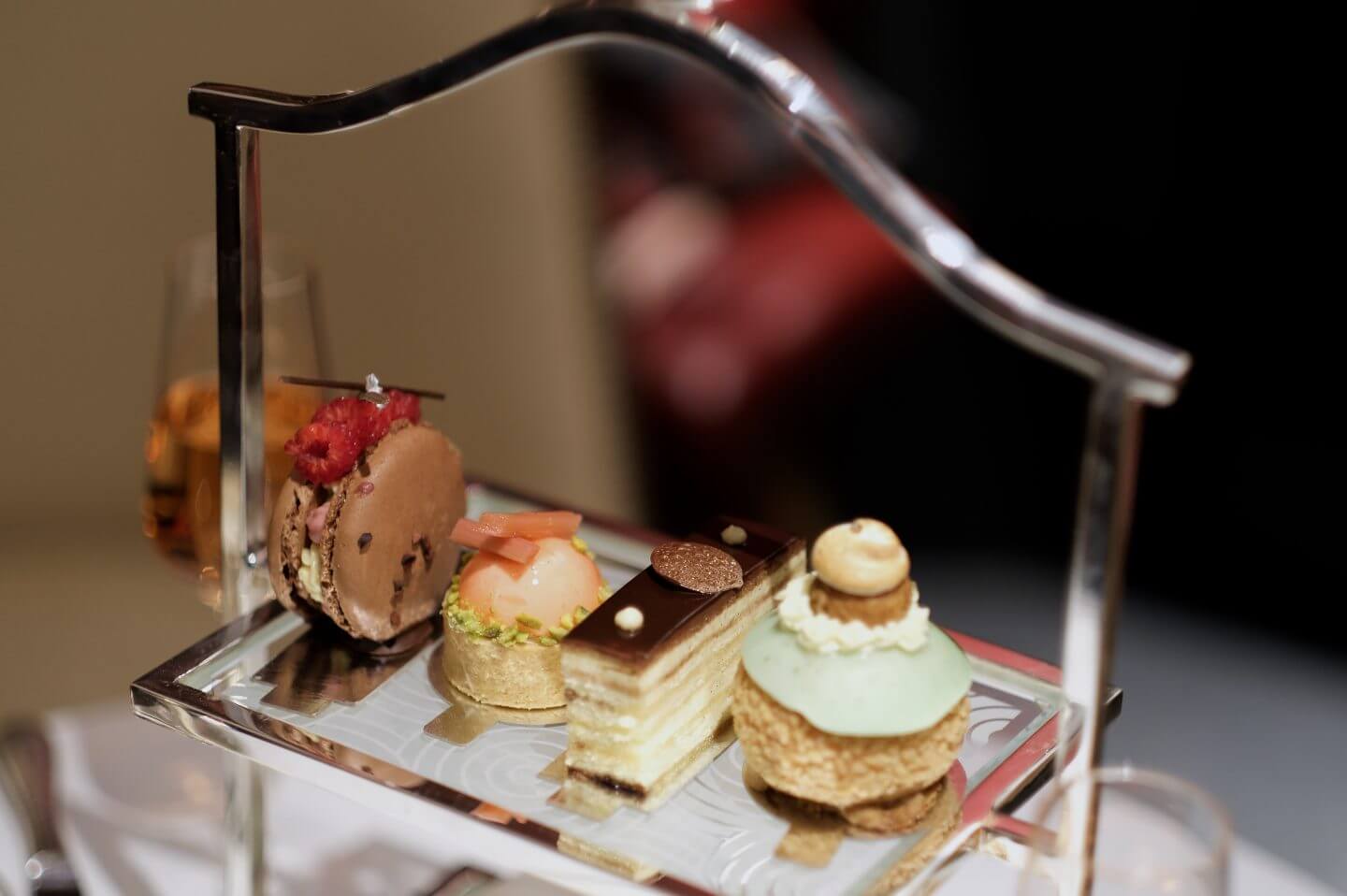 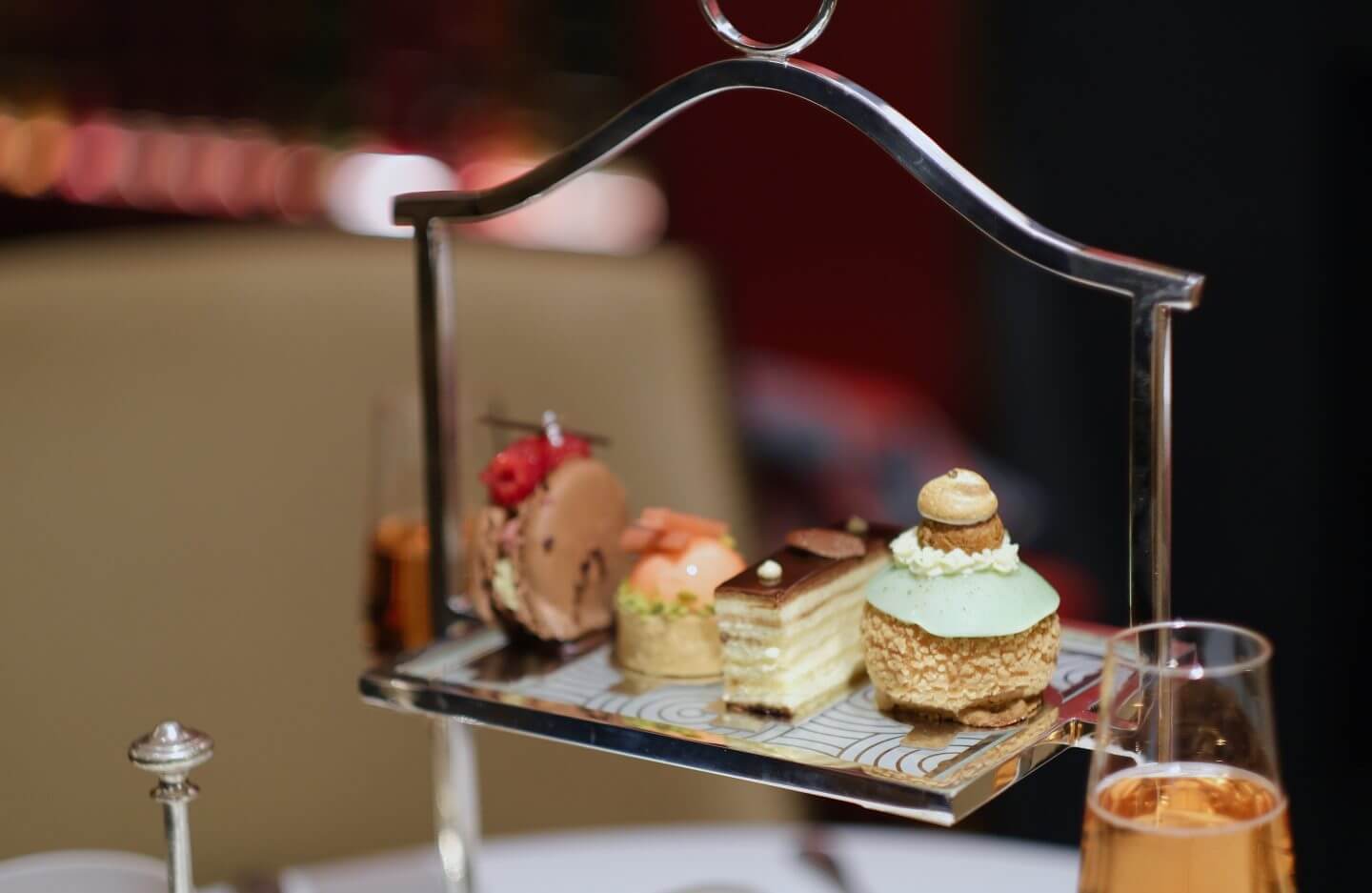 We were recommended the delicately crafted Jasmine Silver Needle to go with our final tier of sweet pastries. Hailing from Yunnan Province in China, they use the sweetest, spring picked white tea buds, and scented of fresh jasmine flowers, an absolutely divine tea to finish with.
The whole experience was thoroughly enjoyable with impeccable service to match. We also had a little peek into the charming Colony Grill Room and elegant Le Magritte Bar, both of which I’m keen to visit sometime in the near future.

Afternoon Tea is served daily in Gatsby’s Room at 3.00pm and 4.30pm. The afternoon on its own is priced at £45.00 per person, or £62.00 per person with a glass of 2016 Gusbourne Rosé. There is also a non-alcoholic drink option which includes a glass of JING Jasmine Pearls Sparkling Tea.

Book Afternoon Tea at The Beaumont

Chef Chat with Jessica Préalpato at The Carlton Tower

Review: Platinum Jubilee Afternoon Tea at The Rubens at The Palace

With excitement building up across the nation in anticipation of The Queen’s Platinum Jubilee weekend celebrations, what better place to celebrate than at The Rubens at The Palace, overlooking the Royal Mews of Buckingham Palace?

The Original Sweetshop Afternoon Tea at The Chesterfield Mayfair

The Chesterfield Mayfair is open once more! Felicia Tan visited to try the